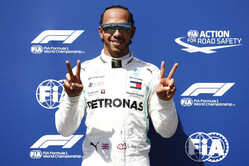 In light of recent events, it's probably fair to say that the only thing worse than Ferrari's strategy this year is the Italian team's definition of the term "overwhelming evidence".

There were plenty of smiles in the Paul Ricard paddock this weekend when it emerged that the cornerstone of the Maranello outfit's case as it sought to have the Montreal stewards controversial decision overturned and Sebastian Vettel handed back the win, was the post-race analysis of the incident by Sky pundit, Karun Chandhok.

Since joining Sky this year from Channel 4, the somewhat pushy, name-dropping driver, who contested ten Grands Prix for Hispania and one for Team Lotus, has had a Marmite effect on fans, many of whom were particularly irked that he appeared to replace Ted Kravitz, who was subsequently brought back into the fold following fan pressure on social media.

Among those highly dubious of exactly what Chandhok's summation of the Montreal incident might mean for Ferrari's case was Lewis Hamilton, who admits that on hearing that the Indian's analysis was to be used felt "relaxed" at the eventual outcome.

"The weekend started off a little bit different, you know," he told reporters. "We arrive usually on a Thursday morning or the Wednesday night and then I obviously got here on Thursday evening. We got through our programme, no problem, but if you're used to a normal four day programme and you change it it's not always the easiest.

"For sure, it was definitely odd coming here when I heard that there was... Ferrari was spending time focusing on something else," he added, referring to the Italian team's plan to have the Canada penalty reviewed.

"Naturally, for me, with my team, I would be having them focus mostly on trying to improve the car, but then we came here and obviously we had that but then I think when I arrived in the morning I heard that Karun Chandhok had... it was Karun Chandhok's video that was the new evidence, and I was pretty relaxed after that. I just put it behind me.

"The last race was obviously... it's not always easy when you hear boos, for example," he said of the Canada podium, "but that's a part of the game and if anything it generally spurs me on."