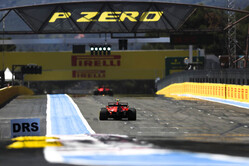 To think that two weeks earlier he was celebrating having won pole position in Montreal.

However, it was an altogether less cheerful Sebastian Vettel who quietly walked away at the end of yesterday's qualifying session, a lacklustre performance leaving him seventh on the grid, behind the McLaren pair.

Admitting to a lack of grip and not feeling comfortable with the car, the German subsequently admitted that a missed upshift wrecked his first run, meaning that everything was based on his second run.

"I don't know why I missed the upshift," he told reporters. "And then I lost so much momentum that it was pointless to finish the lap, so I aborted.

"Then, on the last lap I don't know, I just couldn't feel the same car that I had maybe in other parts of qualifying.

"It was difficult for me because some laps it was really good and it was just coming," he continued, "and other laps... I don't know why I didn't have the grip that I seemed to have the runs before.

"So, it's a a shame that it happened in Q3, it would've been better to be slower in the other segments, but that's what it is today.

"It's not ideal, obviously a bit of a funny session," he admitted, "I didn't get a consistent feel for the car, and didn't extract the maximum, so I can't be happy with that.

"On the other hand, I’m looking forward to tomorrow, I think it's much more straightforward and should be more consistent in the race. So let's see what tomorrow brings.

Asked about the updates Ferrari has brought to France, the German’s response was blunt. "We reverted on most of them, so obviously not the step we expected," he said.

"If I pass as many cars as last year, then I'm going to win the race!" he smiled. "It's a long race, it will be difficult to manage the tyres, to be honest. But I'm sure that in the race things settle down a little bit more and I should have a better feel."

Asked about the McLaren, he said: "I think they showed some good pace this weekend, so it won't be easy, but I think we are faster. Tomorrow I think we have good pace to have a good race. Obviously Mercedes is far away but we should be in the mix with Red Bull."