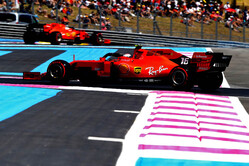 It was a very busy free practice Friday for Scuderia Ferrari in preparation for the French Grand Prix. Charles Leclerc and Sebastian Vettel worked on evaluating various updates brought to the Le Castellet circuit, as well as getting on with the usual qualifying and race preparation.

In the first session, the two SF90s took to the track for a few laps before pitting to have fitted some new components introduced for the French race. Charles and Sebastian then returned on track running just the Soft tyres, doing 21 and 22 laps respectively. The man from Monaco had a best lap of 1:33.111, which put him third, while the German was fifth in 1:33.790.

At the start of the afternoon session, Sebastian went out first on Medium then on Soft tyres while Charles ran the Medium compound. Both men then did some low fuel runs during which they set their fastest lap times. The number 16 SF90 stopped the clocks in 1:31.586, while in car number 5, Sebastian did a 1:31.665. In the second half of the session they also did some high fuel load runs to simulate some sections of the race, while assessing the behaviour of the car and tyres when track temperatures were in excess of 50 degrees.

Charles Leclerc: "I am generally happy with how our sessions went today. The feeling in the car was good and we tested some new parts. We are confident but we still have a lot of work ahead of us to put the car in the best condition for a strong qualifying.

Our competitors are strong and we must focus on ourselves to really put everything together for tomorrow. It was fun to drive on this circuit again. It is a bit of a different track to the others because the walls are so far away that you can push and try more during practice. I look forward to being back in the car tomorrow morning."

Sebastian Vettel: "I would say we have a lot of work ahead of us since not all the new parts we have here performed exactly as expected. I think we have a lot of data to analyze overnight, to possibly have a bit better performance tomorrow.

On the Canada matter I would say we felt that we didn't share the opinion of the stewards during the race in Canada and we thought that we could bring something new. It is disappointing that the matter is not going any further but that is what we have now and so we have to move on."