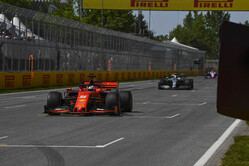 Amidst the talk of whether it was a penalty or not, the fact that Ferrari put up such a strong performance, both in qualifying and the race, has been largely overlooked.

Coming off the back of Mattia Binotto's claim that the issues with the SF90 could not be resolved in the short-term, the Italian team's strong showing in Canada suggested that he might have been emulating Toto Wolff's preference for the position of underdog.

Not so, for Binotto, while confirming that there were no significant upgrades in Canada, insists that the SF90's performance was basically a one-off and that the issues remain.

"It is very difficult to judge and forecast the performance but it is a circuit which is power sensitive and rear limited so not the same as Barcelona which is front limited," said Binotto. "It is more similar to Bahrain rather than Barcelona.

"We knew we could be closer to Mercedes," he says of Montreal, "how close, I don't think we had any clue before coming. I think Friday performance related to them was difficult until the track improved through the weekend with more grip and we coped with that.

"The car is exactly the same as we had in Spain," he confirmed, "no upgrades from then, so let's say our weaknesses we have still on the car. It is as simple as that.

"We need to work," he admits, "try to improve as there will be other races that are not like Canada so we need to keep fighting and challenging them."