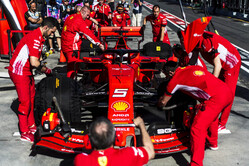 There is no doubt that this weekend marks what could well be a watershed for Ferrari. Though Mercedes has won all six races thus far this season, the nature of the track, according to the German team and Red Bull, should play to the strengths of the Ferrari.

However, while there is no disputing the outright grunt of the Maranello outfit's 2019 contender, due to a number of issues, especially tyres, it is losing out to both Mercedes and Red Bull in corners, and while Montreal only has 14 of them, there is concern that the Italian team will struggle, especially as its German rival is introducing its latest spec engine this weekend.

Earlier this week, team boss Mattia Binotto admitted that there is no short term fix for the SF90's issues, and now, ahead of a race his team really needs to win, he claims that the team is going through a phase similar to that before the golden era of the 2000s.

Back then, having joined Ferrari in 1996, Michael Schumacher went through four difficult seasons before it finally all came together in 2000, the German's best efforts previously thwarted by poor reliability, poor strategy and the Italian team's fondness for shooting itself in the foot.

When it did all come together, it paved the way for a period not entirely dissimilar to Mercedes current domination, Schumacher claiming five successive titles and Kimi Raikkonen subsequently taking another.

"I prefer the comparison with the 1996/1997 Ferrari, a growing team, with solid foundations," he Binotto tells La Gazzetta dello Sport. "We too are a young team in the roles and there is so much hunger.

"I see many similarities with them because of the vision, the desire to work, passion and talent that I find," he adds.

"I am sorry for the beginning of the season, but we must continue to believe in the team," says the Italian. "I know we are asking a lot of our fans, who deserve great joys, but today more than ever we need their patience and their support."

Of course, that golden era came at a time a Frenchman was running the show, with a Briton as technical director and South African designer.

Ignoring the fact that prior to Sebastian Vettel's 'pre glory era' phase, which has lasted 5 seasons, Fernando Alonso similarly suffered for 5 years. Indeed, it is 12 years since Raikkonen won his title, and, as a long-term friend of Pitpass recently pointed out, if you take out that 'golden era' and the one-off title for Jody Scheckter in 1979, it is 44 years since Lauda ruled in the mid-70s.

As part of the Maranello outfit's determination to take on Mercedes, Binotto confirms that the team has undergone significant reorganisation.

"There is no longer the famous classical horizontal structure," he says. "We have identified four or five figures that have become my points of reference in the various areas. I am useful for filtering information and thinking about the future."

It is understood that this refers to Laurent Mekies overseeing trackside operations, Enrico Cardile leading the chassis team, Enrico Gualtieri the power unit and David Sanchez aerodynamics and , all of them reporting directly to Binotto.

"2021 is around the corner with new regulations, cars that could be radically different and the budget cap that will force us to review certain production processes."