Vettel has unfinished business at Ferrari 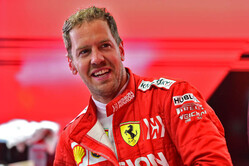 It was clear during the second half of last season, that Sebastian Vettel was going through a difficult phase, the German making numerous mistakes that were to eventually, along with Ferrari's own issues, derail his title bid.

Sadly, this year, Ferrari has continued to make life difficult for itself, both in turns of some strategic nightmares and the fact that the SF90 is struggling to work with the 2019 tyres.

With Vettel never seriously looking as though he was fully 'on it', and under increasing pressure from his new teammate, Charles Leclerc, it is unsurprising that there has been speculation that he might retire at season end.

However, talking to Auto Bild, Vettel insists that he is not considering retirement, stating that he has unfinished business.

"I have no plans to stop Formula 1," he said. "I still have lots of fun, and I still have something to do at Ferrari.

"We want to try everything again this season to bring about the turnaround and the Canadian Grand Prix should be the beginning," he added."

"Our car is good, but we're still getting to know it," he admits, "we're finding it harder this season to find the best way to work with the tyres. We are learning every day, and this knowledge also benefits us for building next year's car.

"Last year, I started from pole and won the race, 40 years after Gilles Villeneuve won here," he said, looking ahead to this weekend. "I will do my utmost to get a good result."

Of course, with Mattia Binotto having admitted that there are no quick fixes for the SF90, some might wonder why, after just 6 races, Vettel is already talking about the team's 2020 contender.