Designer Resta back to Ferrari? 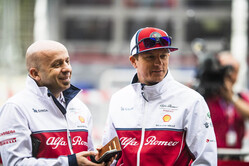 Mattia Binotto has admitted that former chief designer, Simone Resta who is currently with Alfa Romeo, could return to Maranello.

Resta was appointed technical director at Sauber in May 2018, the Italian, who replaced Jorg Zander and reported directly to Fred Vasseur, taking up his role on July 1.

Born in Imola, Resta first entered F1 with Minardi in 1998, moving to Ferrari in 2001. Starting out in the design office at Maranello, by 2002 he was group leader, and by 2006 head of R&D and Innovation. Appointed deputy chief designer in 2012, he was made chief designer in 2015.

Along with Binotto, Resta is seen as the driving force behind Ferrari's resurrection over the last couple of seasons, in particular last year's SF71H, which was widely considered the class of the field, and it is felt that the team's current issues with the SF90 are down to losing him to Sauber (now Alfa Romeo).

Speaking in Monaco, Binotto admitted that Ferrari is considering bringing Resta back on board.

"As a team, no doubt we are always trying to improve ourselves by looking where maybe we miss strengths," said Binotto, according to the official F1 website. "Simone has been with Ferrari in the past, he moved to Alfa Romeo as technical director and is having a great experience.

"We are evaluating him to be back at a certain stage," he admitted, "but that's not something which we have already decided. We've covered his role currently in Maranello, so it's not a plug-in situation.

"But it is true that we're thinking about it, as we are thinking for other people that may join or may leave. In any organisation there is this dynamic and that is normal."