Binotto: It's a mistake that should not happen 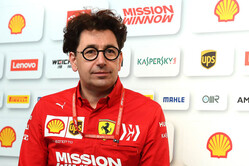 In the moments after failing to make it into Q2, a stony faced Charles Leclerc admitted that he wanted answers from his team as to what exactly went wrong, why he is destined to start his home race from the back of the grid and not the front.

Having initially missed the weighbridge, the Monegasque was subsequently pushed into position and then returned to his garage. Though there was still time to go out, and as he gradually slipped down the timesheets, Ferrari failed to send him out again.

As the clock ticked down he slipped to fifteenth, and then the ultimate irony, teammate Sebastian Vettel who had clouted the barriers at the Swimming Pool and was in danger of missing the cut himself, improved his time and thereby demoted Leclerc to the drop zone.

"I asked whether they were sure," Leclerc subsequently told Sky Sports F1, when asked about the decision not to go out again. "They told me 'we think we are (safe)'. I said 'shouldn't we go out again?' But yeah, there was no real answer.

"I think they thought we would go... I don't know. I didn't have any explanations yet in detail. It's a very difficult one to take.

"We had plenty of time, even when we went out of the box to go out again. The weighbridge was not the problem. We still had the fuel to go again and only change tyres. None of this was a problem. I need some explanations."

"It is not a good day for us certainly," admitted Binotto. "I think we made a mistake because of the way we make call what happened today, nothing more.

"When the cut-off time is calculated, we normally add a margin on top of it and the margin is good enough to afford for any tolerances, uncertainty, whatever might happen during the session normally," he continued. "Certainly what happened today was the margin we applied was not sufficient, for very little, and the reasons are certainly two; the first is the track improvement has been very significant and important by the end of Q1, the second is that probably our margin did not consider enough variability due to drivers' maybe confidence by driving through Monaco. Certainly in Monaco, that margin needs to be increased in future no doubt.

"For us certainly, taking some risks to key to perform as better as we could in Q2 and Q3 to somehow be challenging our main competitors in Q3 together with Charles and Seb. But no doubt, when you look at that, the implication of entering into Q2 is even bigger than trying to challenge them in the final part of qualifying in Q3."

Asked if the team was too busy focussing on Vettel, he was adamant: "No, no, not at all," he replied. "We've got two full teams, one per driver, so we didn't compromise at all. The threshold was the same for the two drivers. On one side, obviously we had the necessity to go out, and on the other...

"Charles asked, by the way, from his cockpit, 'should I go out, I think it's a bit too marginal, we may be at risk'. We replied 'no, we've got the data', and we believed it was good enough. It wasn't.

"As I said, we are somehow maybe taking risks, too many risks, and as I said at the start, it's a misjudgement, and as a misjudgement it is a mistake."