A reprimand for Leclerc 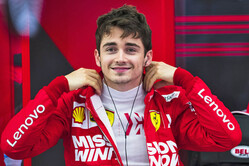 Charles Leclerc has received a reprimand following his infringement of the Virtual Safety Car regulations in FP3.

The stewards reviewed video and telemetry evidence and heard from Leclerc along with a Ferrari representative.

According to their findings, Leclerc clearly and appropriately braked before Turn 1 in reaction to the incident at the corner involving his Ferrari teammate, Sebastian Vettel who had crashed.

The VSC appeared when Leclerc was between turn 1 and turn 2, and while he did slow significantly, he remained below the minimum time set by the FIA ECU until past turn 8.

The stewards recognised that Leclerc was considerably slower than a normal lap throughout the sequence. However, as the VSC is imposed for safety reasons, the
stewards determined that the breach needed to be recognized.

As a result they imposed a reprimand, which is consistent with similar cases during practice sessions.