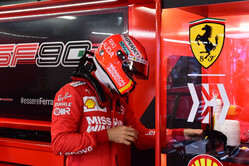 Scuderia Ferrari Mission Winnow racked up 145 laps of the Monaco track over the three hours of free practice for the Monaco Grand Prix. Charles Leclerc and Sebastian Vettel stuck to the softest compound tyre all day.

The Maranello team paid tribute to Niki Lauda with a sticker on the car celebrating the life of the Austrian champion and former Ferrari driver, who passed away last Monday. Sebastian also paid tribute, wearing a helmet featuring a design similar to the red helmet Lauda used for almost his entire career.

In the morning, both drivers worked on car set-up, while completing plenty of laps to get to grips with the specific demands of this circuit, where brushing the barriers but not hitting them, is vital to get a quick laptime. Charles did 25 laps, the best in 1:12.467 and Sebastian did eleven more, stopping the clocks in 1:12.823.

In the afternoon, both men did 42 laps each, running various fuel levels to simulate different parts of the race. The German's fastest time was a 1:11.881, the third best of the day, while his Monegasque team-mate unfortunately ran into traffic on his quick laps and ended up tenth with a lap in 1:12.350.

As usual at this event, there is no Formula 1 track action tomorrow. The 20 drivers in the championship will be back on track at noon on Saturday for the third and final free practice, followed by qualifying.

Sebastian Vettel: "I decided to use a helmet dedicated to Niki. Being a tribute to him, as a person and to his career, the design is based on his last Ferrari helmet. I thought that maybe it was nice to take him along for a final couple of laps around Monaco.

Talking about our performance we are struggling a bit, we are lacking some pace compared to our main rivals. We are still not happy with how the tyres work. I think we have a bit of work ahead of us.

In terms of balance we can still improve on everything. We will work in order to have a car that is more predictable. I am sure on Saturday the situation should improve and maybe it will be also warmer, which could help us."

Charles Leclerc: "We have some work to do before returning to the track on Saturday. The first session was ok and I felt quite comfortable in the car. It was more difficult to put the car and the tyres in the right window in the afternoon, and we were also held up by traffic.

Nevertheless, our competitors are strong and we have to push to close the gap in qualifying. We will give it everything and I can't wait to be back in the car."