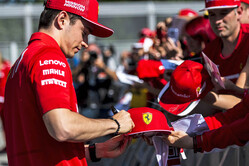 Despite a major aero upgrade and the early introduction of its latest-spec engine, Ferrari was little more than an observer as Mercedes scored a fifth successive win in Spain and Red Bull's Max Verstappen took the final podium place.

While some of Ferrari's Barcelona performance could be put down to its continued poor strategy, the team also struggled for pace. Though clearly quicker on the straights, the SF90 lost out heavily to the Silver Arrows in the circuit's various corners, Verstappen subsequently admitting that there were no corners in which the Red Bull would beat the W10.

"Right now we are losing a lot in each corner, not only in the last sector," admitted team boss Mattia Binotto in the aftermath of the Spanish Grand Prix. "In each single corner we are slow with quite a lot of understeer.

"That is not only downforce," he added, "we have seen something in the data which we need to analyse and understand so an early conclusion would be a wrong conclusion.

Now, having carried out two days of testing at the Barcelona track, Binotto believes that the Maranello outfit has made progress.

"Last week's testing and analyses carried out in Maranello confirmed just how much this year's tyres, which are very different to those we had in 2018, require different mechanical and aerodynamic settings to work properly," he said.

"We are already working in Maranello on evaluating new concepts, as well as bringing some initial further updates here."

Looking ahead to this weekend's race in Monaco, where Ferrari has won on a dozen occasions, he said: "It's a very different sort of race, where the track characteristics that can shake up the order could be jumbled up still further this weekend.

"As usual, qualifying will be very important because of the fact it's almost impossible to overtake. Of course, Monaco is Charles' home race and we know how much it means to him. It means a lot to us too."