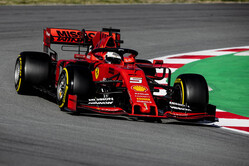 Noted for his English sense of humour, one can only think that the German was drawing on this in the aftermath of qualifying, having finished third, 0.866s off Valtteri Bottas' time.

But for an issue which compromised Lewis Hamilton's Q3 runs the gap might have been even bigger, even so it is clear that the much-vaunted upgrades Ferrari has brought to Spain, including a new engine, haven't done the trick.

With an eye on the fact that he will have Max Verstappen alongside him this afternoon, not to mention Charles Leclerc and the Haas duo behind, Vettel suggests that a daring approach to the race from Ferrari might reap rewards.

"We brought some new bits, a new engine, and everything seems to work," he said, "but clearly we are not yet where we want to be.

"We tried a lot of stuff yesterday, and again today," he continued, "different directions.

"I think we ended up getting the best out of the car for today, which, as I say, wasn't enough and we're certainly not satisfied - but I'm very happy with the approach, with the chance that we took, in terms of trying something daring, something I think ultimately will pay off. Not yet - not today at least! But hopefully it helps us in terms of pace tomorrow. Hopefully sets of the right direction for the next couple of weeks."

It was in the twisty final sector, with its low-speed and medium-speed corners where the SF90 particularly struggled.

“It seems to be an Achilles’ heel at the moment,” he admitted. “They were both very happy with the car, especially last sector," he said of the Mercedes duo, "for us it was a bit more tricky.

"We seem to be faster down the straights, so probably carrying a little bit less wing than them," he added, "but obviously in the last sector there are no straights and yeah, we're struggling a little bit to bring it together. It's not a very long sector but they're quite some corners, and mostly lower speed, and that's where we seem to be losing the most time."

Asked for further insight into the final sector, he said: "Obviously we gain down the straights and we lose in the corners. In the first two sectors we have straights to compensate, so maybe you don't see the losses in the corners but, I think it's pretty transparent: I think you have access to as much as we have to the GPS data.

"We lose time in the last sector in the corners in pretty much every corner. So, from 10 to 15 there's not one corner that stands out. Obviously eight-tenths sounds a lot but if you then divide it by the amount of corners, it's a bit less - but it's still a lot.

"At the end of the day, it doesn't change anything. For us, it's a lot of homework. The car, I think, certainly didn't feel perfect, so there's something we can improve but overall we seem to be a bit down in terms of grip and not being able to carry as much speed through the corner, not go on throttle as easy as them, so it's a loss not necessarily in braking, I think it's more the speed carried around the corner.

"It's not the first time. Obviously here it bites you in the last sector because there are many corners and no straights - but that's what it is. For tomorrow, we'll see what we can do. Certainly the straight-line speed will help us to put pressure on the first straight and then go from there."

That said, if by a "daring" approach he means strategy, on the evidence thus far Mercedes has nothing to worry about.