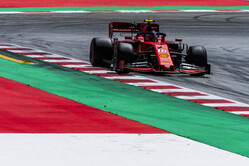 Earlier this week it was revealed that Ferrari was to introduce its spec-2 power unit at this weekend's Spanish Grand Prix, having opted to bring it forward four weeks from its original planned introduction in Canada.

However, team boss Mattia Binotto insists the move was not a knee-jerk reaction to Mercedes start to the season, which has seen the world champions score four successive 1-2s. Indeed, he says the plan to move things forward originated the season opener in Melbourne.

"Obviously when you are planning such a change on your schedule you need to do it a few weeks ago," he said. "It's not something we decided within that week.

"Having started the season in Melbourne we recognized that somehow we may have been late on our, let me say, performance compared with our competitors and we tried simply to push on all the main items where we were already planning developments.

"We were simply looking for opportunities in anticipating some of the programmes," he continued. "We did it already with an aero package in Baku which was somehow introduced earlier compared to our initial programme. We did it here as well for the power unit.

"You simply achieve that by trying maybe sometime to shortcut or intensify the activity. I have to say that the people back at Maranello have worked very hard, we intensified our activities, and we are working still very hard, as it seems that's what we need to do at the moment."

Asked if the spec-2 unit's early introduction, just five races into a twenty-one race season means that Ferrari envisages its drivers requiring a fourth power until before season end, thereby incurring grid penalties, he said: "No, that's not the plan. The early introduction doesn't mean that we cannot still use PU1 in some races.

"Maybe that can be an option," he added, "but certainly we are not hoping to have four engines per season per driver plan."

Asked if the strong pace shown in FP1, signalled a return to the form shown in pre-season testing, he replied: "I think we never dropped away. I think that certainly we had a strong winter testing, but I think that our main competitors were as strong as we were at the time, and on the last day of winter testing they scored the same lap time as us.

"Since then we are both developing our car. The car developed, so coming here it's certainly not any more the same car we had at the time, the weather conditions are completely different, the heat is certainly a different factor.

"So, are we, let me say, on the same page? I don't think you can compare. I think more important that it's a relative competition so it's more important that we are focusing on the weekend and trying to optimize the car and the package, and we are doing our best."