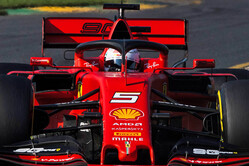 Ignoring the BS from Mercedes in the weeks (months?) that followed pre-season testing, it did appear that we had a genuine title challenge on our hands.

Yet four races in and the Italian has managed just two trips to the podium, both of those to the lowest step, while Mercedes has enjoyed a history making run of four 1-2s.

Summing up his team's start to the season, Sebastian Vettel didn't pull his punches.

"When we first went testing we were ahead," he said. "At the end of testing we were a match. First race we were behind. Second race slightly ahead. Third and fourth race behind, both for qualifying and the race."

With a brand new engine this weekend, the German and his teammate are hoping that they can finally get to grips with Mercedes on what in many ways is a make or break weekend for the Maranello outfit.

"This weekend will be interesting for us because we had such a good feeling and it's not so long ago," he said of the pre-season tests.

"I'm pretty sure I remember how the car felt," he continued, referring to claims that the SF90 has never felt the same since testing, "and it will be interesting to see how it behaves over the next couple of days. I'm quite confident if we can get to that level we should be very competitive."

The new engine, introduced four weeks earlier than originally planned, partnered with aero upgrades introduced in Baku, is clear evidence of how much importance the Italian team is placing on this event.

"We want to make the car faster," he said. "Here and there we were reasonably quick, but not quick enough overall to put the cars on the front row in every event.

"We are lacking a little bit but overall the package is promising," he insisted. "We know we have a strong car, we struggled a bit to put it together, so a bit of pace and drivability.

"We are confident about the parts we bring here and we're introducing a new engine as well. We have got some stuff that we think should help us to be stronger than the last races."