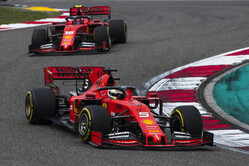 While the Italian team's strategy remains questionable, to put it mildly, Ferrari carefully side-stepped the ongoing problem of team orders by pitting Sebastian Vettel on Sunday at a time Charles Leclerc was closing as a fair rate of knots.

Both Mercedes and Red Bull have had their problems in the past with team orders, and consequently team bosses Toto Wolff and Christian Horner appreciate Ferrari's predicament.

"From my standpoint, we've been quoted a lot about the Ferrari situation and I don't think it's right," said Wolff. "We are not in the right place to comment from the sidelines about what is happening in Ferrari.

"What I can say is that we have been in a situation with Nico and Lewis that was tricky to manage at times," he continued, "and equally not easy with Valtteri and Lewis, because two drivers that want to win races and do have the potential to win championships, that can be conflicting interests sometimes, and you just need to talk about it.

"It's not trivial," he insisted. "It's a situation that certainly has an advantage for the team, because drivers are pushing each other and extracting more performance out of the car, but equally in managing personalities and strong characters is never trivial, whether it's drivers or engineers or managers in general."

"I think different teams have different philosophies," said Horner. "Arguably having a very clearly defined number one and number two driver is almost easier to work with.

"That isn't our philosophy at Red Bull. We allow the drivers to race and sometimes that can be uncomfortable, as we saw twelve months ago," he continued, referring to the infamous clash which saw Daniel Ricciardo and Max Verstappen eliminated from the 2018 Azerbaijan Grand Prix.

"The philosophy that we've always had is to give both guys the same opportunity and let them establish who is the lead driver on track. I think so long as you have clear rules of engagement then we've been, I would say, 90 per cent successful with that.

"In the three years that Max and Daniel raced with each other there were only ever two incidents, which considering they were starting next to each other at 90 per cent of the races is a pretty decent ratio.

"But each team has its own philosophy. It doesn't make one right or one wrong, it's just unique to each team, how they choose to racing."