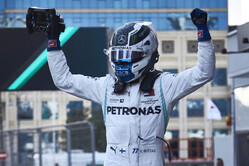 Valtteri took his fifth career victory today - his second of the 2019 season and first at the Azerbaijan Grand Prix. Lewis came home in P2, completing a 1-2 for the team. Today's result marks the 25th podium for Valtteri with Mercedes-AMG Petronas Motorsport.

Valtteri Bottas: This victory feels really good. When you're starting from pole, you hope for a straightforward race - the less drama, the better it is. I didn't have the greatest start; after the wheelspin in China I was maybe just a little too cautious. Lewis had a better start so we went side-by-side into Turn 1 and 2; it was good, respectful racing between the two of us and I'm glad I could pull up in front of him. Lewis was very quick today and was able to put on some pressure at the end of the race, so I had to make sure to not make any mistakes. I've already said it on the radio after the race: 'What a team!' The level at which everyone is performing at the moment is very impressive, both here at the track and back at the factory, and I'm really proud of everyone. We need to make sure we keep delivering at this level.

Lewis Hamilton: This is a great result for the team. I think this team is stronger than it's ever been and it's all down to teamwork. Both Valtteri and myself are pushing the boundaries of the car and are delivering, as are the team in the pitstops, the engineers, and everyone back at the factory. I don't think we have ever performed at this level before and I'm really grateful for all the hard work from everyone. Baku is not my strongest race, it's always been difficult for me. I came close to the win today, but not close enough. I didn't get the job done in Qualifying and then I was a bit too cautious at the start. I also had an issue with the VSC and that made it tough to catch him up. But those are all ifs and buts; Valtteri drove a great race and deserved the win. It was great that the team let us race though. I'll work hard to bounce back and pick up the performance for Spain.

Toto Wolff: I'm really happy, this was another fantastic performance from the entire team. We didn't make any major mistakes today and that's what has won us this race; our car was quick, the strategy calls were right, the pit stops were executed flawlessly and the drivers didn't put a foot wrong. We let the two drivers race today; we told them to take it easy at the beginning of the second stint because we didn't know how long the tyre would last, but both at the start of the race and in the end they were free to fight each other. Both of them perform really well under pressure and neither of them made any mistakes today, so it was a calculated risk but it was good to see them race each other in a clean, respectful manner. I'm very pleased with the result and happy that Valtteri found some redemption after his bad luck here in Baku last year.

James Allison: It wasn't the crazy bumper-car rally that Baku can sometimes be, but for us it was a stressful, thrilling pleasure to manage a race on a tricky track with our drivers fighting tooth and nail at the start and then getting very close to one another again at the end. To manage a race like that, to finish first and second again and keep the momentum of our championship rolling - it's been a dream start to the year and we couldn't be happier. We just need to make sure we can make it all happen again in two weeks from now in Barcelona where we saw the Ferraris were very fast in winter testing.