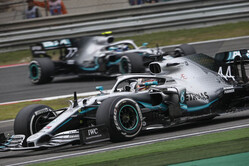 When Red Bull decided to pit Max Verstappen for a second time on Sunday, as the Dutchman, at that point running fourth, headed into the pitlane, it left rivals in a quandary, to react or not to react.

Sure enough, next time around Ferrari brought in Sebastian Vettel, which left Mercedes with a stark choice, which of its two drivers to pit first.

"It was actually Toto who suggested that we do a stacked stop," reveals trackside engineering director Andrew Shovlin in the team's latest Pure Pitwall debrief.

"That then becomes a discussion between James Vowles and Ron Meadows," he continues. "Ron is the sporting director and he is just checking that he is comfortable with the gap between the cars, that we can get the pit crew ready to do the stacked stop and have both sets of tyres in the pitlane. James is the one who gets the final decision on this and he decides to go ahead with it."

While the stop ran like clockwork, and was the defining moment of the race, if not the season, Shovlin admits that it was not without serious risk.

"You don't have two cars to practice with," he says. "We do have a pitstop car and we can practice getting both sets of tyres out, we can practice doing two stops in succession but you can never quite get the same situation with the car rolling into the box.

"It is quite difficult for the rear jack man as he has to get out of the way when the first car leaves and then get into position when the second one comes in," he adds. "The choreography is quite tricky, there is a bit more to organise. Having that many tyres in the pitlane is a bit of a risk, so you have to make sure the right tyres go on the right car. But it is something we do as much preparation for as we can.

"You try not to do them unless you have to because if you have any problem with the first car, it also impacts the second, and you can go from being first and second in the race to third and fourth in no time. It isn't something you do every day, but on the occasions it makes sense it is a really good tool to have in your tool set."