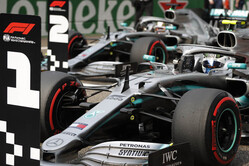 Though Sunday's race saw Mercedes score the first three successive 1-2s at the start of a season since Williams in 1992, Lewis Hamilton is taking nothing for granted.

While much of the focus is on the internal issues at Ferrari, Sebastian Vettel and Charles Leclerc seemingly heading for a cantankerous relationship that brings to mind the many in-team battles the sport has witnessed over the years - albeit in this case fighting for third place - the fact is that, overall, the SF90 is not as good as the W10.

Nonetheless, though not quite claiming his team's irritating underdog position, Hamilton warns that there must be no letting up in maintaining the pressure on its rivals, as Red Bull, and, particularly, Ferrari, are eventually going to get their acts together.

"As a team we arrive and everyone does their best job, you have to try and operate to 100% and we are close to that," said the Briton.

"With what we have we are operating at its full potential," he added. "But there will be more performance improvements to come; we will make steps forward.

"They have a good car, Ferrari. It just does not look like they are extracting their full potential over the weekend, and then their execution doesn't always look as faultless as they have shown in the past.

"We know that we've got Ferrari knocking at our heels and we know that the Red Bulls are there or thereabouts somewhere," he added, "but again, they're not delivering as a whole, as we are as a team and that's what it takes today, just overall maximum attack.

"It will be interesting to see how the next races go," he admitted "The key this year, as it was last year, is to deliver near perfect weekends. Weekend in, weekend out. That has to be the goal."

And while the 'row' over Sunday's tactics from Ferrari continues, the fact is that the pair were looking for third place at best.

And as the Mercedes steamroller continues, giving every indication that at least one title could be sewn-up by the summer break, and Ferrari remains distracted by in-house silliness, surely that 'mic drop' moment on lap 36 when the German team pitted both its cars without missing a beat was a warning to all that this is a team already entirely on top of its game.

"I think we're over-delivering a little bit at the moment to our true, true potential, but there's still more to come," Hamilton ominously warned.