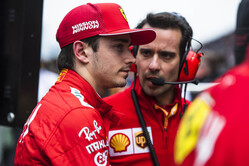 Other than its lack of pace, Ferrari has drawn fierce, widespread criticism today, for its use of team orders which eventually were to cost Charles Leclerc fourth by leaving him exposed to Red Bull's aggressive strategy with Max Verstappen.

Having passed teammate Sebastian Vettel by Turn 1, and then been told to up his pace as he began to lose ground to the Mercedes pair, Leclerc was subsequently ordered to allow the German through.

Once through, Vettel not only lost ground to the Silver Arrows, his lack of pace left Leclerc susceptible once Red Bull went for the undercut with Verstappen.

Furthermore, it marked the third time in as many races that the Italian team has used team orders.

While the media sought to play up the situation, Leclerc wasn't playing ball, insisting that he wants to see the full picture before passing judgement.

"I did a good start, and then the first stint was a little bit messy," the youngster told reporters. "Obviously I think you've seen on TV with Seb.

"I'm pretty sure there is, for sure, an explanation behind this decision and I will understand it," he added. "I need to look at the data and speak with the engineers first to understand. I don't want to make any silly comments before that.

"Anyway, it's the past. It has not been a great race for me, but overall the weekend has not been as strong as I wanted. In qualifying it was OK, but in FP1, FP2 and FP3, and also going in the race without any mileage on high fuel runs was not ideal.

"Overall, today was not a good day, but we'll come back stronger," he insisted.