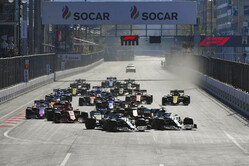 In the wake of the battle that raged in the first few corners of yesterday's Azerbaijan Grand Prix, it is understandable, when one reflects on the clash of the Panthers in 2017 and the Bulls in 2018, that Toto Wolff might have felt a little anxious as Lewis Hamilton turned up the wick and closed on his teammate Valtteri Bottas in the final stages of yesterday's race.

However, the Austrian has confirmed that the Silver Arrows duo were free to race one another and that there were no team orders.

Though the TV cameras picked up on Wolff reaching for the team radio, Wolff insists he was not issuing team orders.

"The moment you talk to the drivers, it's open, so everybody can hear that," he said after the race. "But then, obviously, you have the intercom, which is only an internal line, but I was not talking to the drivers.

"If I push the driver button, I know myself, so I'm not giving myself permission to talk to the drivers, because I'm getting emotional and then sometimes I regret what I say," he continued. "So, no, I have never talked to the drivers directly in the race.

"It was more a discussion with the group of strategists on the pit wall," he added. "It was a discussion on whether Vettel would actually come close, whether we would save the engine. It was about whether Leclerc or Verstappen would go for fastest lap. It was more an overall discussion. We acknowledged that it could get a little bit racy at the end, but we didn't talk to them."

Asked if he would have become involved had things got hairy, he insisted: "No, we would let them race.

"They are both very experienced," he added. "They both know that racing must be clean.

"You see lap one, lap one was very clean, and this is a track where you mustn't take crazy risks, because it could lose both of the cars, and they know that."