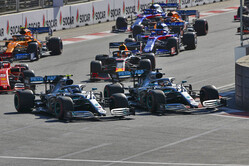 On a recent trip into London, there in Leicester Square, among the levitating Yodas, buskers, preachers and ticket touts was a small portable table with a sign on the front bearing the words... "tarot card reading by Merlin Trotter".

Sadly, Mr Trotter was not around - possibly called away due to unforeseen circumstances as they say - but we can safely predict that even he would be hard-pressed to forecast the outcome of today's race.

While it might not be in the runes, it most certainly will be in the temperatures, the grip, the strategy, the stewards, those moves where ability out-runs talent and, for some, those red mist moments.

At the best of times there is the opportunity for calamity, but given the events of the last couple of years, not to mention what we witnessed on Friday and Saturday, today basically anything could happen. In other words, expect the unexpected.

Those who dismissed the thought of Sergio Perez taking a third podium here should think again, and while the stewards appear determined to outdo fate in mixing things up, only a fool would stick his neck out.

Much as we loathe hyperbole, we must admit that, thus far, this weekend has had everything, drama, comedy, sadness, frustration and admiration... not to mention Sebastian Vettel quietly ditching the 'tache.

While David Bowie claimed that "we can be heroes", we can also be idiots, and though Pierre Gasly, who starts from the pitlane, has the ideal opportunity to shine, he could just as easily screw it up at the first corner. Indeed, he might not even be responsible, for there are plenty of over-ambitious drivers out there keen to make (or win) a point, only too willing to help him.

And let's not forget that Baku has history in terms of teammate's what with the Force India pair in 2017 and last year's clash of the Bulls.

Not having been blessed with the gift of soothsaying we'll leave the predictions to other, and sit back and enjoy the ride.

That said, while Mercedes has the opportunity for a fourth successive 1-2, Sebastian Vettel could spoil the party, as could Max Verstappen who wrung the neck out of his Red Bull yesterday.

And while Perez, Kvyat and Norris start in the top ten, as do Sainz and Ricciardo, the man to watch surely has to be Leclerc, who following the exclusion from the qualifying results of Kimi Raikkonen, will now start from eighth.

Following yesterday's self-confessed stupidity, what better way for the youngster to make amends... and open his win account. Again, as Bowie said: "Watch that man".

Nonetheless, there's a very wide pit stop window, effectively from lap 15 onwards, so those numbers can be considered only as a guide. Indeed, as we've already seen this weekend and from the past, the strategy can be heavily influenced by safety cars, but on paper a two-stopper is definitely slower.

As the cars head out, Leclerc is warned of "slippery track" in T15. Hamilton reports that his car feels "very strange".

Leclerc is the only driver in the top ten starting on mediums, though behind Grosjean, Russell, Kubica and Gasly are also on the yellow-banded rubber. The rest are on softs.

They head off on the warm-up lap, all except Kubica, Raikkonen and Gasly that is.

They're away... Hamilton and Bottas are side-by-side into T1, the Briton on the inside as the go through the corner and head on to the straight leading to T2. Hamilton still has the inside in T2, his teammate running worryingly close to the barriers. That said, Hamilton, on the dirty side of the track is struggling for grip.

Behind, as Vettel holds third, Perez goes around the outside of Verstappen to nudge ahead for fourth.

Bottas finally has some breathing space, but only a little a Hamilton falls in behind.

Meanwhile, Ricciardo has got ahead of Leclerc, the Australian making a typically cheeky move on the run to T1, and Norris is ahead of Kvyat.

Further back, Albon gives the wall at T1 a clout with his right rear, the youngster lucky to get away with that.

No incidents on the opening lap as common sense prevails. At the end of the lap it's: Bottas, Hamilton, Vettel, Perez, Verstappen, Norris, Kvyat, Sainz, Ricciardo and Leclerc. Bottas, after a hairy couple of opening corners, has 2.3s lead over his teammate.

Leclerc makes short work of Ricciardo and sets off after Sainz, however, the youngster is clearly struggling on his mediums. That said, no sooner has Sainz passed Kvyat than the Russian is passed by Leclerc also.

Leclerc sweeps past Sainz to take 7th, the next target being the other McLaren, that of Norris.

Courtesy of DRS Verstappen hunts down Perez and captures 4th as they enter T1.

Kvyat pits at the end of lap 5.

6.6s down on Hamilton, Vettel is told to push. Meanwhile, teammate Leclerc passes Perez for 5th.

Raikkonen pits at the end of lap 6, the Finn receiving an adjustment to his front wing. Meanwhile, Gasly is up to 12th.

Next time around Magnussen pits, as does Giovinazzi.

Closing to within 1.4s of Verstappen, Leclerc is the fastest man on track.

Hulkenberg pits from 16th at the end of lap 8.

Leclerc is lapping around a second quicker than the Mercedes pair, both of whom appear to be struggling.

Verstappen reports a loss of engine braking in two particular corners. To add to his misery, moments later he is left for dead by Leclerc.

Next target for the youngster is a certain Mr Vettel, who is 3.5s up the road.

Stroll, in 8th, leads a train of cars that includes Gasly, Ricciardo and Stroll.

Perez, Stroll and Ricciardo all pits at the end of lap 10, rejoining in 10th, 18th and 17th respectively.

Vettel pits at the end of lap 11, which conveniently allows Leclerc through without any radio calls. The German rejoins in 5th ahead of Sainz.

Bottas is told that Vettel is in the pits, the Finn responds by following suit. No double stacking today.

As Bottas rejoins in fourth, Sainz and Albon pit.

2.3s later the world champion is heading down the pitlane again, emerging in fourth, 4.2s down on his teammate. 2s behind the Briton, Vettel posts a new fastest lap (46.931).

As Verstappen pits, at the end of lap 14, Kubica is given a drive-through for being driven to the pit exit early at the start.

Hamilton responds with a new fastest lap (46.588), as Leclerc enjoys a 12.7s advantage over Bottas.

Verstappen closes in on his Red Bull teammate who is up to 5th. The Frenchman puts up no resistance when his colleague makes his move.

"Leclerc still has the safety car gap, so we want to pull him in," Bottas is told.