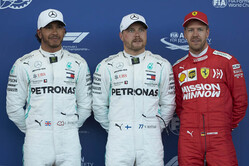 Q: You've got to be the happiest man here today, Valtteri; what a sensational last lap to grab pole position. An interrupted session, you kept your composure, and I guess you stole that pole position from Ferrari, because they have been ever so strong?
Valtteri Bottas: Yeah, I'm really happy for that. It was a nice feeling to get it done on the last lap - it was a nice lap. As you said, Ferrari have been really strong, so obviously Charles was out, by a mistake, and as a team we did really good to be where we are now after such a difficult practice.

Q: After everything that happened in China in Q3, it looked like you and Lewis had some traffic, but then, crucially, we heard your engineer saying you picked up a tow in the last sector, was that the difference to get it?
VB: Well, it's all about small margins and I did get a good tow in the last lap. Of course, the corners I have to drive as well. It's all about fine details and I managed to hit the sweet spot.

Q: How difficult was it to get the temperature into the tyres with the cold conditions?
VB: Yeah, it was getting trickier and trickier. We're not supposed to race that late here but yeah, I got them to work somehow.

Q: Lewis, a Mercedes front-row lockout again. I know you always want pole position, but it's a good job by you all to re-engineer this car and take the fight to Ferrari.
Lewis Hamilton: Absolutely. It's been so close all weekend. Ferrari have looked incredibly quick and Valtteri did an exceptional job in qualifying. It's just a massively great result for us, because we came here, we didn't have an upgrade, the Ferraris looked like they were particularly quick, also with Max, so for us to lockout the front row due to circumstances, I'm really grateful for it. It puts us in a good fighting position for tomorrow.

Q: Do you think you can continue that? What can we look forward to tomorrow? Do you think you can take the fight to Ferrari?
LH: I hope so. I think that pace-wise we are slightly closer in race trim than it seemed in qualifying. Sebastian... I don't know if he got a great lap but he may not have been in the right space, because it's all about tows here. But nonetheless, we've got a good crowd here; I hope the weather is good. Valtteri is always quick here so I've had my work cut out so far this weekend.

Q: Sebastian, P3 on the grid. It was looking so good this weekend for you and Charles. An interrupted session. These guys just stole it at the end?
Sebastian Vettel: I don't know if they stole it. I think they were a bit quicker than us today. For me it started a bit slow. Towards the end it was getting better, but it was quite tricky. The session was very long, the sun is going down, the track cooled down, so it was difficult to get the right balance of pushing on the out lap and playing with tow, trying to get something. I had a good lap but I had no tow to close the lap, so that cost a bit. But happy that we sort of got the maximum out, but I'm not happy that overall from a team point of view we were expecting to have a better session, with Charles and myself closer to the front.

Q: Just give us an insight: how much can the tow be worth? You were obviously at the front of the queue but that gives you the best preparation but they obviously maximized it by gaining that [tow]?
SV: Well, it depends, but up to half a second. Then it's always a compromise, as if you are too close in the middle sector you lose out, but I would say going with the other people, probably around three tenths. So yeah, it could have been a bit closer with somebody in front, but yeah, as I said, the track was getting cooler, the car was more difficult to drive and I prioritized to push on the out lap to have the tyres in the window when I started the lap. Now I sort of regret that I maybe didn't take the gamble on, but I still think it was probably the right call.

Q: Valtteri, your second pole position of the season, but is it fair to say this one is a little more unexpected than the first?
VB: You could say. Definitely after the practice yesterday and then this morning we saw Ferrari was extremely quick. Also Red Bull was quick. Even at the beginning of the qualifying they seemed kind of out of reach. But you never know what can happen. We don't give up. In the end, Charles went off and it came down to one lap at the end. So I'm really happy for us. Obviously also a nice lap at the end and that really feels good.

Q: You mentioned the lap at the end. How good was your final lap and how tough was it to get that lap clean when you had Lewis behind you and a car in front as well?
VB: Well, it's obviously also the weather, because everything was delayed and it was a lot cooler, so the tricky bit was to get the tyres to work. When it comes down to one lap on this kind of track the tow effect is quite important and I managed to get quite a pretty good gap to the car ahead. But yeah, it feels good when you have a good lap when it matters.

Q: Congratulations. Lewis, it was so close between you and Valtteri and on your final lap I think you made a small mistake in the first sector. Is that where it got away from you, or did that help you later in the lap as you improved in the final two sectors?
LH: Well, firstly, Valtteri did an exceptional job. It was a great result for us as a team. Coming into the weekend it didn't look like we had the pace. The race pace looked good but the pace in qualifying we thought we might not be as c lose as we would like to the Ferraris. But we worked on the car and improved it today. Yeah, unfortunately my first two corners were pretty shocking. I had a small moment in Turn 1 and then in Turn 2. So already by Turn 4 I think I was three tenths down. But I recovered that in the next two sectors but unfortunately it wasn't enough, and Valtteri did a great job.

Q: You mentioned the fact that both of you have got the job done. How big an advantage was it having two Mercedes cars in the final part of qualifying, and do you think that will help you in the race, given that Charles wasn't in Q3 and that Pierre didn't take part in it either for Red Bull?
LH: Sorry, I didn't understand that...

Q: How big an advantage was it to have the two Mercedes cars in Q3? Certainly when you're working out the tow and trying to prepare those final laps.
LH: I don't know that it makes a big difference, in the sense that you can still find your way behind someone else but it was definitely perfect for the team to have both cars there, and ultimately that's the ultimate difference that Valtteri and I have been able to make at the moment, so we need to capitalise on that.

Q: Sebastian, moving on to you, a similar sort of question. Were your chances affected at all by the fact there was only one Ferrari in Q3?
SV: Well, we would have loved to have two Ferraris in Q3 but I don't think it makes a difference obviously. You try to find a sweet spot in the track, which is always tricky and you can see everybody is just waiting in the pitlane and doesn't want to be the first one out. In the end I didn't have a tow on my final lap, which cost some time in the last sector but it was quite tricky; the conditions were changing; because of the long qualifying session temperatures were dropping and yeah, I think it was even more important for me to feel the tyres and make sure they are there from the first corner. So, yeah, it was a difficult session but I think having one or two cars doesn't necessarily make a difference. It's trying to find that sweet spot. It's a bit of a gamble always.

Q: You mentioned on the grid that you were happy with the lap that you produced in the circumstances - but after the final practice session, did you really expect Mercedes to be able to overturn the gap that yourselves had?
SV: Yeah, I think it's been a trend that we are a bit faster in free practice compared to them, so I think it's just down to doing things a bit differently but... yeah... certainly I struggled a bit in qualifying. It wasn't straightforward this evening. So, mostly I think with the track changing, going with the conditions was quite difficult. Only in the end I think it started to come back. The last two runs, and especially the last run, seemed to be a bit more straightforward in Q3. Before that obviously it was key to make it through which, with the interuptions that we had, and the cleaning going on on the track, wasn't the most straightforward thing. Certainly not happy from a team point of view because the pace looked really, really good in the practice sessions so far - yet we find ourselves behind those two again! But, tomorrow is a long race and I believe we have a better car with continuous laps.

Q: Valtteri, returning to you. Taking this pole position, after what happened last year in Baku, does it feel like you've got a bit of unfinished business tomorrow?
VB: Well, for sure it was... yeah, I kinda feel like that. Even though starting from pole, in some races it might feel like 50 per cent is done but here it's nowhere near 50 per cent. Anything can happen here. We've seen that once I was one lap behind and I finished second in the race. Once I was leading three laps from the end and I didn't finish. I'm glad, as a team, we're at the front and it will be fun tomorrow.