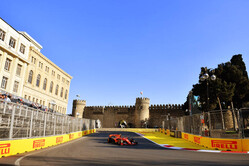 The relative lack of track action meant we didn't actually learn so much today. FP1 was largely written off due to a loose manhole cover, while the red flags were also out intermittently in FP2 as various drivers hit the wall, interrupting quali and race simulations.

There was consequently a high degree of track evolution when the cars were running, making it hard to get an accurate read on relative performance.

The performance gap between the medium and soft tyres is expected to be between 1.2 to to 1.4 seconds, but due to the track evolution, a higher gap of around 1.7 seconds was seen - because the cars were running on the faster compound as the circuit improved.

Wear and degradation is low, thanks to the smooth surface and low energy demands. As a result, teams have concentrated on the soft and medium tyres rather than the hard.

Temperatures have been variable throughout the week so far, with 20 degrees centigrade ambient and 38 degrees asphalt during FP2.

Mario Isola: "It was a slightly inconclusive opening day here in Baku, which demonstrated all the unpredictability that a street circuit can offer. Because there was so little running in FP1, the track was especially slippery in FP2, and the subsequent track evolution - as well as more red flag stoppages when cars hit the wall - made it hard to get a true picture of the performance gap between the compounds. We'd expect the current gap of 1.7 seconds between the medium and soft to come down tomorrow, although the gaps will always be quite big on such a long track. However, we've already seen some themes emerge: wear and degradation are very low, and there's been a particularly strong performance from Ferrari on both tyre compounds during the opening day. FP3 tomorrow will be very significant as the cars prepare for qualifying on what should finally be a level playing field, after most of their short and long runs were interrupted today."