Kubica not expecting to benefit from unpredictable Baku 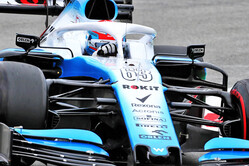 As Williams continues to investigate the fundamental issue plaguing the FW42, Robert Kubica admits that he doesn't expect the team to benefit from the unpredictable nature of the Azerbaijan Grand Prix this weekend.

In 2017, Lance Stroll was a surprise visitor to the podium in Baku, the Canadian claiming third for Williams, just two weeks after scoring his first ever world championship points. Last season, it was Sergio Perez who made it to the podium, the first and only time all year that a driver for a team outside the top three was to join the big hitters.

Ahead of what many are already building into a potential classic - and we all know what that usually means - Robert Kubica isn't expecting to benefit from Baku's reputation for delivering the unexpected.

"Baku's showed that everything is possible," he said, "but I think we are too far off from the pack to think about it.

"Of course in the past editions, especially two years ago, a lot of things happened during the race and some cars finished in the front, but we will have to see.

"This is a new track for me so I'm not thinking too much about the race," he admitted. "I'm thinking about approaching the weekend in the right way and trying to get a good feeling straight away on a street circuit."

Other than the well-documented "fundamental" issue teammate George Russell reported after just one race, both drivers cite different handling issues in terms of the aerodynamic behaviour of their cars. Kubica admits, that this issue also, has yet to be resolved.

"I don't know exactly how we are going to, let's say, approach this week," he said, "but I would say from what I know people have been working on it and trying to understand, but I think for now we don't have a clear solution."

Asked if he has previously encountered a situation where two cars react so differently, he admitted: "No. Unless there was a problem. In this particular case, no."

This weekend marks the Pole's first race on a street track since he previously raced in F1 in 2010.

"I did a couple of laps on the simulator but unfortunately our track in the simulator is not representative to what is reality," he admitted, "so it will be kind of my first approach tomorrow.

"I would expect a higher level of alert in the beginning of the session, which is normal, especially when are you on a street circuit for the first time. It has always been a special feeling driving in the past near the walls. It's a bit different driving."