What makes the streets of Baku so wild? 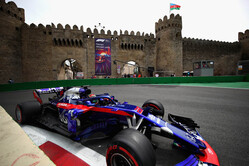 Baku has hosted some of the most entertaining races in recent years - and plenty of on-track chaos. Indeed, the Safety Car made three appearances during the 2017 Azerbaijan Grand Prix and twice the following year. So, what makes the streets of Baku so wild?

First of all, it's a street circuit, which means that the cars race on relatively narrow roads - particularly in the old town - with tight walls and few run-off areas. While that doesn't necessarily make driving more difficult, it does mean mistakes have harsher consequences. If you get something wrong in Baku, chances are your weekend becomes much quieter while that of your mechanics is suddenly much busier.

Getting the tyres in the optimal temperature window is crucial; F1 tyres operate at temperatures of around 100 degrees to provide optimal grip levels. However, making sure that the tyres, and, in particular, the front tyres, reach their performance window can be quite difficult in Baku.

With the Azerbaijan Grand Prix taking place relatively early in the year, track temperatures are usually quite low; in fact, Baku has the potential of being the coolest track we will see all year. During last year's race, track temperatures averaged about 25 degrees celsius - a relatively cool surface for F1 tyres to drive on. And even on a sunny day, large portions of the track are in the shadow and don't warm up.

The track layout adds to the challenge as the tyres cool down on the long straights and the slow corners don't create a lot of energy to warm them up. This challenge is exacerbated under Safety Car conditions when the cars have to go slower than usual, putting even less energy into the tyres. That's why aggressive tyre warming manoeuvres are quite common in Baku.

The Baku City Circuit features a unique layout as it's basically two tracks in one - half Monza and half Monaco.

The long straight with a heavy braking event at the end shows similarities to the Italian power circuit whereas the twisty, narrow old-town section shares some of the characteristics of Monte Carlo.

This unusual mix of character traits makes the set-up of the car an interesting balancing act. The brakes, for example, cool down significantly on the long straight into Turn 1; well below the temperatures where the discs and pads produce maximum friction and are therefore most effective. Closing up the brake ducts to keep the brakes as warm as possible would thus be ideal in that section; however, it would make the brakes overheat in the old town where the absence of longer straights means there's little opportunity for the brakes to cool down between turns, requiring more air flow through the brake ducts than teams would want for the 'Monza part' of the circuit.

In terms of downforce it's about compromise. When F1 first came to Baku in 2016, teams would veer towards higher downforce packages to be quick around the low-speed corners of the track. Realising that this slightly higher downforce set-up ultimately cost lap time owing to the drag penalty on the massively long straight, the balance has shifted towards a package with less downforce. The wings don't quite reach the level of Monza; however, they are in the medium-downforce region that teams run in Spa or Montreal.

The trickiest moment under Safety Car conditions is always at the restart of the race. This is particularly true on a track like Baku where the start-finish straight offers lots of overtaking opportunities and being the leader of the pack is somewhat of a disadvantage: Go too soon and you will catch up the Safety Car before it enters the pits. Go too late and you can be a sitting duck to cars tucked up tight in your slipstream.

In preparation for the Azerbaijan Grand Prix, teams therefore review Safety Car restarts more closely than at any other track because of the wide variety of options.