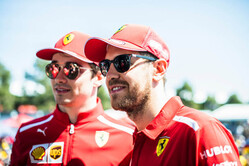 Formula 1 is visiting Baku for the fourth time.

The race first appeared on the calendar as the European GP in 2016. From the following year, it changed its name to the Azerbaijan Grand Prix. The Baku street circuit is one of three venues on the current calendar where Scuderia Ferrari Mission Winnow has never won. The other two are Sochi in Russia and Yas Marina in Abu Dhabi. The best result for the Maranello squad at this venue was last year's second place courtesy of Kimi Raikkonen.

The Azerbaijan capital has only recently featured on motorsport's world stage, with the first race, a GT event, being held as recently as 2012. Nevertheless, the circuit was an immediate hit with the drivers who like the extremely high speeds experienced on the straights, especially on the start-finish one, which sees speeds in excess of 350 km/h.

The track features long straights and right-angle turns. That makes engine power a key requirement, while drivers have to brush the walls in search of a quick lap, using every inch of the track. There's also a tighter section around turns 8,9,10 and 11, including the incredibly narrow section around the ancient castle, where good traction is the main requirement. The circuit map can be misleading, because it claims there are turns 17,18, 19 and 20 but this section is taken flat out and DRS can be deployed here.

Sebastian Vettel: "This six kilometre circuit has the longest straight on the calendar, 2.2 kilometres, where we reach 360 kph before the very heavy braking for the first slow left hand turn. The steep climb past the old city walls is only seven metres wide, which feels very tight in a Formula One car - you feel like you are threading a needle. There isn't enough space for two cars here so you have to agree on the right of way between you! A big challenge at Baku is to find the right wing level to get good grip for the slow corners but also to be fast enough on the straights where we spend a lot of time at full throttle. It's not an easy compromise."

Charles Leclerc: "Azerbaijan is one of my favourite tracks of the season, I simply love it and I've always performed very well there, having won and got another podium finish in Formula 2 and also scored my first Formula 1 points last year. I always enjoy driving on it, especially the castle part with all those tight corners. It's a unique track, you cannot find anything like it anywhere else in the world, so it's pretty special. The rule is quite simple: never lose focus during the race otherwise at the first mistake you're in the wall. Baku is a demanding track, but I can't wait."

Mattia Binotto: Coming off the back of three races that definitely didn't go the way we wanted, this GP is another important moment for us. We have prepared for it very well, analysing all the data we have acquired up until now, looking at areas where we can improve and working on adapting the car's set-up and the power unit management to the characteristics of the track. In fact, Baku features a very long straight, which places special demands on the engine, both the internal combustion part as well as the hybrid elements.

"It's relatively easy to overtake on this track, partly due to the DRS, especially this year as it has a greater effect than in the past. The track surface is very smooth, which means tyre wear is generally low, but as the tyres therefore generate less energy, it can be difficult to get them in the right working temperature range.

"We know from past experience that there's a high probability of the Safety Car appearing on track in Baku and therefore it's an important aspect to consider when looking at the race strategy. We are bringing a few updates to Baku, as the first step in the development of the SF90."