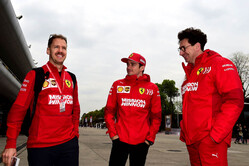 In an already politically charged sport, Ferrari has always added another dimension, be it the Maranello outfit's attitude towards the powers-that-be in terms of the management and governance of the sport or its own internal issues.

When Mattia Binotto was promoted to the role of team principal many believed this was a bad decision by the team, for while the Italian had been doing a superb job on the technical side of things, there was concern that this new role would be compromised by his having to get involved in all manner of other matters, which would in turn impact the team's technical performance.

Sure enough, three races in and already 57 points adrift of Mercedes, rather than concentrating on improving the SF90, especially in the areas where it is losing out to the W10, Binotto is increasingly finding his time taken up with having to explain the situation between his two drivers, a situation that the media will rake-up every time there is a questionable radio call.

"Mattia finds himself having to manage what is definitely a new situation for Ferrari, in the shape of two drivers fighting at a very high level," says Brawn. "For now, he is managing the situation well.

"On the one hand with the talented young Leclerc, while managing the valuable resource that is Vettel, who as a four-time world champion has shown himself capable of dealing with pressure in the past.

"This is definitely a tricky year for Sebastian," he admitted, "and the podium in Shanghai will have been a confidence boost, while Charles has shown great maturity in accepting team decisions that are not easy to digest.

"The first three races have confirmed that if Ferrari wants to challenge Mercedes everything has to be perfect at all levels, performance, reliability and teamwork," said Brawn. "That's what Binotto and his guys have to do and, knowing Mattia, I am sure he is aware of that and will devote all his energies to ensuring it happens."

All in all, Mr Brawn does not sound entirely convincing.