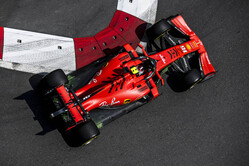 This morning's session was abandoned after a loose manhole cover was fully dislodged by George Russell's Williams, badly damaging the back of the car and causing officials to have to check the remaining 219 covers.

With Russell needed a new chassis, the rules stipulate that he cannot run again until FP3 tomorrow.

With only two drivers posting times earlier - the Ferrari duo - little was learned, and while the timing of the session meant that it bore little relevance in terms of qualifying and the race, it means that the likes of Ferrari, Mercedes and Red Bull were unable to learn much in terms of the updates they have brought here.

The only two cars not to make an appearance this morning were the Mercedes', they make up for it by being first out this afternoon.

They are subsequently joined by Stroll, Raikkonen, Giovinazzi and Norris. All six are on the mediums.

An early trip down the escape road at T2 for Bottas, the Finn lucky not to hit the barrier as he spins the car around.

Hamilton gets things underway with a 51.382, but this is soon beaten by Giovinazzi who crosses the line at 51.382. Following his off, Bottas can only manage 56.629.

The Ferraris and Verstappen are last to emerge for what should be a busy session.

Another off for Bottas, this time at T1.

As Kvyat reports issues with his steering, Ricciardo has a big lock-up in T1.

As Hamilton goes purple in the first two sectors, Vettel and Verstappen head out.

Hamilton posts 46.110, the Briton and his teammate running close together, clearly looking at slipstreaming possibilities.

With Bottas having made use of the run-offs twice, now it's Hamilton's turn, the Briton deciding that the runoff is the best option after locking up in T8. Onboard footage shows the world champion thinking about taking the corner as he locks-up but clearly thinking better of it.

"I can survive," replies Ricciardo when asked about his tyres after his previous lock-up.

Having previously gone seventh, Vettel now improves to third with a 45.847, while Verstappen posts 47.877 to go thirteenth.

Replay shows Leclerc clouting the walls with the left side of his car, the rear of the SF90 taking a particularly hard knock. The youngster had just gone quickest (44.748).

The session is red flagged after Stroll clouts the barriers, ripping off the front-left wheel. Replay shows him getting the corner wrong and leaving it too late before taking the run-off option.

In all fairness, as we saw in FP1 - what there was of it - the track is very, very dusty, hence the high number of incidents.

Sadly, the Baku balls-ups continue. Following the incident in FP1 with the low-loader, the Racing Point has been placed on a flatbed truck. Unfortunately, there is no crane with which to remove the car.

As the session is about to resume, Hamilton tells his team: "Get the other wing ready... the grip is higher."

Vettel heads straight down the escape road at T3... he clearly won't be the last. He is on the softs. Indeed, most running thus far, certainly by those at the top of the sheets, has been on the red-banded rubber.

Split strategy for Red Bull, where Gasly is on softs and Verstappen is on mediums.

Leclerc gets a lovely tow from his Ferrari teammate, however the Monegasque only marginally improves (43.376).

Early days, but both Mercedes drivers are almost a second off Leclerc's pace.

Moments later, Vettel, having now had a tow from his teammate, crosses the line at 43.196.

Another blistering lap from Leclerc, who stops the clock at 42.872.

Magnussen improves to sixth (44.901) on the softs. Teammate Grosjean is currently 12th.

Norris is told to pit for a new nose box.

A 44.216 sees Albon move up to fifth, the Thai driver clearly benefitting from the Honda upgrade.

Gasly makes a right meal of returning to the track after going down the escape road at T3.

Shortly after Ricciardo gets it all wrong at T15. It was a long, long lock-up that resulted in lots of smoke and even some flames as his brakes were put to the ultimate test.

Attention now switches from outright pace to longer runs, though, as he finally heads out, for Kvyat it is still about getting a few laps under his belt.

Verstappen is now on softs, the Dutchman improving to fourth with a 43.793, albeit 0.921s off Leclerc's pace.

Kyat posts 44.204 to go seventh, ahead of his Toro Rosso teammate, and Gasly.

As Vettel heads out on mediums, Grosjean heads down the escape road at T3 and Norris at T2.

Having been given a list of chores, Leclerc replies: "****, I forgot the burn-outs".

A big, big lock-up for Perez, who is currently a disappointing 13th, 2.5s off the pace.

Oh dear. The session is red-flagged after Kvyat gets it well and truly wrong at T7.

Replay shows him losing the rear after applying the power too early. He hits the barriers causing extensive damage to the left side of the car. As flames lick out from the front brakes a marshal jumps out with an extinguisher.

"I'm sorry guys," he tells his team, "the suspension is gone."

Then session resumes with just over 16 minutes remaining. Among the first out, there is an immediate lock-up for Vettel. Elsewhere, Bottas reacquaints himself with the run-off at T3.