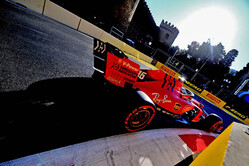 Yesterday's two sessions were clear evidence that Baku really is the place where the unexpected can almost certainly be expected.

Be it manhole covers - or it that personhole covers - lowloaders, flat-bed, Lane Stroll, Daniil Kvyat or the wind, yesterday we had everything.

Furthermore, on a day in which almost everyone took a trip down the numerous safety roads at one point or another, it's fair to say that we can expect more of the same today and tomorrow.

Always green, the lack of running in FP1 only exacerbated the problem, while the wind and general lack of grip, not to mention some overambitious moves didn't exactly help the situation.

In their efforts to overcome the various issues a number of teams have been burning the midnight oil, with Mercedes running a bigger wing than seen yesterday and Renault also looking for more downforce.

During what we expect to be a busy session, one of the busiest drivers is sure to be George Russell who was ruled out of FP2 following his encounter with the manhole in the earlier session.

Though the youngster never expected to be battling for pole, or even a place in Q2, he expected a bit more than this.

Giovinazzi has a 10-place grid penalty for tomorrow's race, while Gasly will start from the pitlane after failing to stop at the weighbridge.

As more drivers head out, most are on hards while the McLaren pair are on softs.

As the previous runners head back to the pits following their installation lap, Gasly and Kubica head out, both on the softs.

Gasly posts the first time of the day, the Frenchman crossing the line at 49.815. Moments later, Kubica posts 49.832.

Ten minutes in and the Mercedes pair head out, both on the mediums.

Gasly improves to 48.394. The Frenchman is running less downforce than his teammate, seemingly to allow less drag as he attempts to work his way through the back-markers following his pitlane start tomorrow.

A 43.929 sees Hamilton take the top spot as Norris goes fourth, ahead of Bottas, Perez, Stroll, Hulkenberg and Kubica.

Having only marginally improved, Bottas is told that he lost time in T7.

Magnussen, who was involved in a controversial, but unpunished, incident with Hamilton yesterday, is the first driver to take advantage of the escape roads, the Dane going off at T2. Shortly after Giovinazzi follows suit.

Raikkonen goes sixth, ahead of Perez and Giovinazzi, but is demoted when Albon posts 44.884.

With 37 minutes remaining, Grosjean and Verstappen are the only drivers still to post a time.

Grosjean posts 46.324 to go 15th, with Verstappen going 8th moments later, the Dutchman demoted when Albon goes fourth with a 44.097.

Hamilton is told that he's losing the most time (0.5s) to Leclerc in the middle sector.

Ricciardo told not to upshift to 8 but keep in seventh.

Sainz and Albon appear to think it's Sunday, the pair battling for track position and the Spaniard actually cutting a corner at one stage. The pair are currently seventh and fourth respectively.

With 20 minutes remaining, Bottas heads out on softs. Shortly after he is followed by his, similarly booted, teammate.

While Bottas posts PBs in the first two sectors, Hamilton immediately goes purple. The Finn posts 43.233 to go third, but is demoted when the world champion posts 43.176, still 0.538s off Leclerc's pace.

As Leclerc heads out for his qualifying sim, there is clearly a problem with Vettel's car. Indeed, Mattia Binotto is in the garage overseeing things.

Perez improves to fifth with a 43.430, the Mexican posting PBs in the first two sectors.

Bottas complains of "hesitation" out of T2.

Though he goes quickest in the first sector, Hamilton appears to back off and abort the lap. Or had his tyres given up?

Leclerc goes quickest in S1 as Vettel finally heads out. All are on track bar Russell.

More bad news for Vettel, who heads down the escape road at T2.

A PB in S1 for Vettel, the German maintaining his pace in S2, despite losing a little time behind Bottas. He's quickest off all in the final sector but remains 0.198s off his teammate's pace.

A late improvement from Giovinazzi sees the Italian go eleventh (43.687), slotting in just behind his teammate.

Though he sets another PB is the opening sector of his next flying lap, Vettel subsequently aborts the lap.

Ricciardo is told he is losing time at the exits of Turns 6 and 12.

Following his previous battle with Albon, Sainz is now mixing it with Raikkonen.