Gasly to start from pitlane 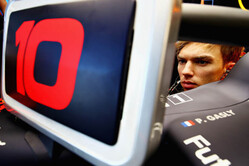 Pierre Gasly will start Sunday's Azerbaijan Grand Prix from the pitlane after missing the weighbridge during today's second practice session.

Alleged to have failed to stop for weighing when required to do so, a breach of Article 29.1 a) of the Sporting Regulations, the stewards reviewed video evidence and heard from the Frenchman and a team representative.

They determined that Gasly failed to stop for weighing and instead, drove on and proceeded to do a pit stop where the car was worked on by lifting the car and all four wheels were changed.

Previously drivers have been given reprimands for missing the weighbridge but on these occasions the car was immediately returned to weighbridge without any work having been carried out on them, it was the pit stop that earned the Red Bull driver the pitlane start penalty.

"In the short runs, the laps were a bit messy but I think we have good potential if we manage to put everything together," said Gasly at the end of today's second session before learning of the investigation. "With the high fuel, I'm feeling better and I'm pretty happy with the long runs.

"Of course we would have liked to run in FP1 but I think we managed to do everything we wanted to in FP2," he added. "We ran quite a lot of tests and we have a good direction for tomorrow.

"We know we have some performance so I'm pretty positive. With the braking, it was a bit tricky and I had to take the escape road a couple of times because I was finding the limit. The car is getting better all the time and I'm happy with the feeling I'm getting from it.

"Ferrari seemed quite a lot faster today but we'll see what we can do in qualifying tomorrow and like I say, we have a good race car so this is positive."

The Frenchman ended the day ninth quickest, 0.447s off his teammate's pace.