Verstappen willing to pay the penalty for more power 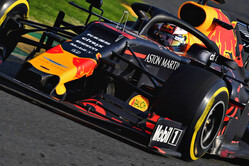 With Honda introducing its Step-2 power unit this weekend, just four races into the season, the spectre of grid penalties is already hanging over Red Bull and Toro Rosso.

However, Max Verstappen admits that it is a price he is more than willing to pay if it means the Japanese manufacturer is able to provide him with more power.

"I am really happy because they keep pushing really hard to bring updates so that is always good," the Dutchman told reporters in Baku.

"Last year I showed that even if you start at the back you can still finish on the podium like for example in Austin," he added. "So I don't think it is a major problem.

"I am happy if we can say by the end of the season that we have really closed the gap to Ferrari and if we use a few more engines then that is fine," he insisted.

"I am happy that they did it," he said of the upgrade, "and hopefully we can run that engine longer compared to the first one, which we can still use, there is no problem with it."

While Verstappen and Gasly will now take on their second Internal Combustion Engines (ICE) of the season this weekend, the Toro Rosso pair will take on their third, penalties applying as soon as a fourth unit is used.

"I think in the race we are more competitive," said Verstappen. "In qualifying it is mainly just Ferrari that stands out, it is massive, but like I said before they have found something in their engine that really works so it is good. It gives Honda good motivation to work even harder which they do."