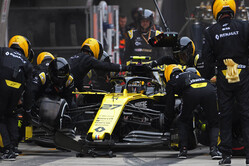 Though, despite retiring within moments of one another in Bahrain, thereby prompting the safety car that preserved Charles Leclerc's podium position, Daniel Ricciardo and Nico Hulkenberg were classified as finishers, the fact is that from 6 starts this season the yellow and black cars have only made it to the end of the race on 2 occasions.

Despite introducing a new-spec MGU-K for China, the component given to all Renault-powered drivers, Nico Hulkenberg's retirement yesterday was related to the MGU-K.

Nico retired with an MGU-K related problem that we will investigate further after this weekend," said Cyril Abiteboul. "We will look at the weekend as a whole and our focus switches to the next race."

Nonetheless, the issues leave the French team with one of the worst reliability records on the 2019 grid, while yesterday was the first time that (Renault-powered) Carlos Sainz made it to the flag, the Spaniard's retirement in Melbourne first alerting the French manufacturer to the problem.

"It's too early to say exactly what happened," Abiteboul subsequently told Motorsport.com. "But we had the problem in Melbourne, and a very quick reaction in Bahrain for one part only for Carlos.

"We had to push massively on production in order to get more parts, which meant that we had to fast track some of the process and some of the sign-off that we do," he admitted.

"Basically something was triggered that we had not had the time to properly sign off," he revealed. "It's not an excuse, it's a fact. All of the other cars have worked without any problem using the same part. We've covered 5000kms on the dyno with that part. It's just for one particular reason we went into a mode which triggered something in the software."

With the issue thought to be a software glitch that will not require modification of the hardware, Abiteboul is confident that there is no need of another spec MGU-K.

"We don't think so. We think it's something that is outside of the part itself, we don't think that the part that Nico was using was damaged. We think it's a software issue, we think we need to change something on the software to deal with something that was changed in the hardware. That's why we were hoping to try and fix it in the course of the race. Maybe it was not broadcast, but there were a number of actions that Nico was trying to do. He could not go as far as rebooting the whole car.

"That's almost what was necessary," he admitted. "If you want to drive the car now, you could, it's working absolutely fine! It's a typical software problem, you have a 'freeze' you need to reboot. It's pretty much what we were trying to do on track, but it didn't work."

Nonetheless, after three races, Renault is joint third inj the team standings, under pressure from Alfa Romeo, McLaren and Haas.

"We need to investigate," he admitted, "and we need to stop putting ourselves in such a complex situation, backs to the wall, having to react in an emergency, because you can't work in an emergency in F1. We are playing catch-up with that, and that has to stop as soon as possible."