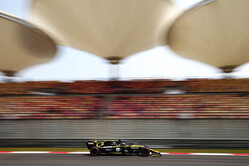 Renault F1 Team will occupy the fourth row of the grid for tomorrow's Heineken Chinese Grand Prix - the 1,000th race in Formula 1 history - with Daniel Ricciardo seventh and Nico Hulkenberg eighth in Shanghai.

Nico eased through the first part of Qualifying in fifth place, requiring just one run to make Q2. Daniel too comfortably made it through Q1 on his second effort, with both drivers progressing to Q3 courtesy of improved laps on their final runs.

Elsewhere, Development Driver Guanyu Zhou took to the streets of his hometown of Shanghai in the Renault-powered E20 Formula 1 car, as he put on a show at the Heineken Fan Festival.

Nico Hulkenberg: "It's a really good team result. The car has been feeling good and performing well all weekend and we had a smooth qualifying today. We managed to get into Q2 on just one run, which is pleasing. I was happy with all my laps, we knew it would be close and it shaped out to be that way. The important thing is the team result and we can race strong from there. Our long run pace yesterday was competitive, the package feels good and we'll be pushing for a double points finish."

Daniel Ricciardo: "I'm really happy for the team with today's result. It's really good to have both cars in Q3; that's a solid result. This midfield battle is so tight and your weekend can change within one or two tenths of a second, so it's pleasing to be at the head of that midfield battle. My Q3 lap was actually a little bit messy in the final sector, so I was happy to hear we had finished seventh. Tomorrow, we'll realistically like to hold onto the top seven and see if we can go after sixth."

Alan Permane, Sporting Director: "We're happy with seventh and eighth today. We had a smooth session with both cars into Q3 and we can be pleased with today's effort. Of course, we would have liked to have been slightly higher. We feel well prepared for tomorrow's race and we have good grid slots to target strong points. Both cars worked well on long runs yesterday and we'll continue our work tonight to evaluate our options on strategy for tomorrow."