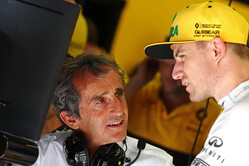 Nico Hulkenberg faced a cruel end to his race in Bahrain after a superb drive from seventeenth to sixth. But the German remains in a positive frame of mind as he gears up for the 1000th Grand Prix in Shanghai.

How do you feel after Bahrain?
Nico Hulkenberg: I would like to take the positives from Bahrain. Disappointment can happen in racing, but we move on as a team, learn from what happened and do everything possible to prevent it from happening again. We showed we had good race pace. There was a lot of overtaking, which we were able to hold our own in and we executed a slick two-stop, together with good pit-stops from the crew. We must build on these positives and head into China knowing that if we string together a decent enough weekend, we're more than capable of leading the midfield.

Where are the key areas on a lap of the Shanghai International Circuit?
NH: Shanghai is a circuit I quite like racing at, even though it's a tough lap to get right. The most famous combination is through Turns 1 and 2, which seems to go on forever. It can be easy to take it too fast, especially coming in from the long straight. It wears the front left tyre quite significantly and that's something to watch during the race. Tyre management is also crucial in China. Elsewhere, the long back straight brings a good overtaking opportunity into the hairpin. Last year we enjoyed a successful result in Shanghai, so hopefully we can repeat that in 2019 and get our year back on-track.

What else stands out from the Chinese Grand Prix?
NH: China is a busier one away from track as Formula 1 continues to grow in popularity there. It's the 1000th Formula 1 Grand Prix and that's quite special to be a part in. The fans are usually very excited in Shanghai, which is awesome to see and makes it even more important for us to put on a show. Renault is a big market in China and there will be a lot of activities going on to harness that.

Daniel Ricciardo heads to Shanghai on the back of a positive day's testing in Bahrain, as he continues to grow his familiarisation with team and car. Daniel, race winner in China in 2018, is determined for another bright outing in the Far East.

How comfortable are you becoming in the car, especially after the Bahrain test?
Daniel Ricciardo: I'm certainly getting there in terms of extracting the maximum and getting more comfortable. These things do take time, but it's good to iron out these details going forward. We'll get there soon and sure enough and I'm confident we're heading in the right direction. We showed signs of that over the race weekend, going from a struggle on Friday, followed by an improvement on Saturday to being in and amongst it on Sunday. The car clearly has pace, but for me, it's about finding all of it. I feel there's a lot more to come.

What are your thoughts on the Shanghai International Circuit?
DR: Up until last year, China was a circuit I always seemed to go really well at but without taking a podium. I knew I was due a podium in China and last season that came alive. It was a really good win, coming from sixth on the grid. I probably made one of the overtakes of the year on Valtteri into the tight Turn 6, so that made it even sweeter!

In terms of the track layout, it's actually quite unique There are long straights, a really tricky Turn 1 and lots of overtaking opportunities. You can pass at Turns 6, 9 and 14 too; there are some decent places to outdo people on the brakes, which is cool.

What's there to say about the Chinese culture?
DR: Shanghai is a bit of a commute from the circuit, but there are lots of things to do including enjoying some of the cuisine and seeing some sights; it's a really cool city! The atmosphere there is growing, the fans are quite hardcore with lots of photos you've never seen before to sign. They are great people and make a brilliant effort to come out and support.