Leclerc to use Bahrain engine in China 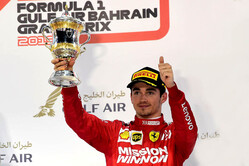 Ferrari has revealed that the issue in Bahrain which robbed Charles Leclerc of almost certain victory was due to a short circuit within an injection system control unit.

The fault was traced by the Maranello outfit's engineers who admitted that the "type of problem had never been seen before on the component in question".

During the race it was claimed to be an MGU-H issue, though Ferrari subsequently said it was a fault in a cylinder.

Ferrari revealed that the engine used in Bahrain, and which developed the fault just 13 laps from the end, and resulted in him losing positions to Lewis Hamilton and Valtteri Bottas, will be used in next weekend's Chinese Grand Prix.