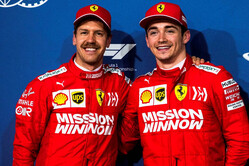 This weekend, Scuderia Ferrari Mission Winnow will be competing in the sixteenth edition of the Chinese Formula 1 Grand Prix.

As always, it takes place at the Shanghai International Circuit, where Rubens Barrichello in a Ferrari won the very first race in 2004. The track features long straights, high speed corners and some tight turns that call for heavy braking. The key points include Turn 13, which leads onto a straight over one kilometre in length and 15, that exits onto the start/finish straight, at the end of which overtaking is a possibility.

Apart from the aforementioned victory in 2004, Scuderia Ferrari has won a further three times in China. Michael Schumacher won in 2006 in the 248 F1 to record the 91st and final win of his amazing career, his 72nd for Ferrari. The following year it was Kimi Räikkönen's turn, making the most of championship rival Lewis Hamilton's retirement, thus laying the foundations for taking the world title in Brazil. The fourth win came courtesy of Fernando Alonso in 2013.

This year's Chinese Grand Prix is truly a milestone in the history of Formula 1, as the Shanghai circuit hosts the one thousandth race of the championship. The top motor sport series began on 13 May 1950, with the British Grand Prix. Scuderia Ferrari did not take part, joining from the next round in Monaco. From then on the Scuderia has been a constant presence, contributing to some of the sport's greatest moments. Ferrari has won 16 Constructors' and 15 Drivers' titles, as well as 235 race wins, 220 pole positions and 752 podium finishes.

Sebastian Vettel: "The Chinese GP has been on the calendar for quite a while and it's held on one of the most technical and difficult tracks of the year. Two of the corners are especially important: the first one and the one leading to the very long straight, over a kilometre in length. They're both very technical and it's difficult to find the right line because the track there is also very wide. They are challenging, not only in qualifying when you need to do just one lap, but also in the race.

"Looking after tyres is one of the key points in Shanghai, it's the most important job to do on Sunday in order to be fast for the whole race. In the past I've had some good races here with Ferrari, coming very close to winning. Maybe this time we'll get that little bit of luck, so that we can really celebrate the thousandth Formula 1 race."

Charles Leclerc: "I don't know the Shanghai track that well, having only raced there once, last year. I have good memories of qualifying, less so of the race itself. But overall, I like the track a lot because there are many different types of corner that you don't find elsewhere on the calendar, especially turn 1, and also 13 which leads onto the long straight. Usually, the Chinese race is good fun, because the weather can be unpredictable and rain can arrive when you least expect it.

"It's the thousandth race in the history of Formula 1 and I hope the car will be as good as it was in Bahrain, so that I can continue to go for the results we deserve."

Mattia Binotto Team Principal: "The third round of the season takes place at a track that is different in character to those in Melbourne and Bahrain. Here, we have a very long straight and corners that put an uncommon amount of load on the front end. For our part, we want to verify that the SF90 is also competitive on this type of track and ensure that the reliability problems we had in Bahrain are not repeated. As usual, we want to do well and take on our competitors. It will be race number 1000 in the history of Formula 1, which is a further reason to try and excel."