Kubica to start from pitlane 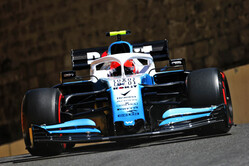 Robert Kubica will start today's Azerbaijan Grand Prix from the pitlane after Williams made changes to his car following Q1 crash.

The pole will join Pierre Gasly who will also start from the pitlane having fallen foul of the weighbridge rules on Friday.

Kubica crashed heavily in Q1, hitting the barriers on the inside at T8 before spearing into the barriers opposite. In Q2, pace-setter Charles Leclerc crashed at the same corner, the two lengthy delays to repair the barriers playing into Mercedes hands.

"Anything can happen and does," said the Pole as he anticipated one of the only races on the calendar where the Williams could feasibly finish in the points. "It's one of those grands prix where you have to make sure that you see the chequered flag.

"Of course with many safety cars and many accidents, you have to be there so you have to be a bit lucky as well. It's definitely a track where a lot of things happen and we've seen that unfortunately with me in qualifying."

Asked about the crash, he said: "I turned in a bit too early and clipped the left wall on the inside, the damage opened up the wheel there and then it pushed me into the outside wall.

"With the cooler track conditions, the warm-up was a bigger issue than with FP3," he continued. "Then we had an issue which we also had yesterday, which isn't bringing a lot of confidence but I don't want to find an excuse.

"I should probably take a bit more of a margin for what was not giving me a lot of confidence," he admitted, "but yeah, that's how it is.

"Same corner I nearly crashed there a couple of laps earlier when I was on a slow lap. I nearly went straight into the barrier. This time I corrected too much and the car actually braked and turned in too good. As I say, I should take a bit more margin there and that's it."

Asked if Leclerc's similar accident at the same spot offered him some comfort, the Pole was quick to react.

"No, why should I take comfort? Part of this game is our mistakes and that place is extremely narrow and as soon as you do something wrong there is a high price to pay for it.

"I think that many drivers escape the barriers by a very small margin and it's those kind of places where a small mistake costs a big price."