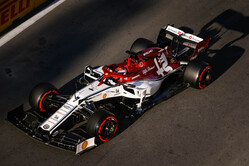 Ahead of today's Azerbaijan Grand Prix, Alfa Romeo has been summoned by the stewards over an issue with Kimi Raikkonen's front wing.

In revealing the summons, the stewards state that Raikkonen's front wing "deflected more than 5mm under a load of 60N".

Article 3.9.8 of the Technical Regulations, states that: "Any part of the trailing edge of any front wing flap may deflect no more than 5mm, when measured along the loading axis, when a 60N point load is applied normal to the flap".

If the charge is upheld, Raikkonen would likely be excluded from the qualifying results and would therefore start from the pitlane along with Pierre Gasly and Robert Kubica.

Ahead of a race where anything can - and usually does - happen, try explaining to a casual fan the fact that Kimi could miss out of a possible podium due to an issue that few are aware of, and even fewer fully understand.