Ricciardo admits to a "bit of panic" 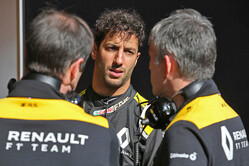 Daniel Ricciardo has admitted to "bit of panic" and a "sense of urgency" following the incident that led to a moment that will surely come to haunt him.

Having caused Daniil Kvyat to run wide after out-braking himself in a bid to pass the Russian in Turn 4, you could almost hear the memes firing up as the Australian slowly but surely compounded his error by revering into the Toro Rosso.

Speaking after the race, having learned that his silliness has earned him a three-place grid penalty in Spain, and a guaranteed spot in the season round-up video, the Australian was clearly embarrassed

"I obviously don't feel good about what just happened," he told Sky Sports. "It was weird.

"I guess, I mean, I know obviously what happened but at the time it was just, it was looking quite good for us. We had started to pick up the pace and obviously closed in on Dani. I saw a gap so I thought I'll have a go.

"It's always tight into (turn) 3 but I had, initially, I had let's say the commitment I thought I'd pull it off. Then I felt I was going to start to lock and miss the corner so then at that point to be honest as soon as I went down the escape road it was just I sensed a sense of urgency and a bit of panic I guess, if you will, and was just trying to minimise the damage and lose as little time as possible. So I found reverse and started going and to be honest I had no idea he was there.

"I guess the urgency stopped me from looking," he admitted, "and when I went long to be honest i just thought he would have cut back and stayed on track. Just trying to minimise the mistake I made which turned into another mistake.

"Kind of crappy on my part. Certainly I feel bad for the team, and for Dani. Obviously it's not cool but I felt the team obviously deserve more than that. There were positives with the pace, but this is not the way I wanted to end it.

All weekend we haven't really been on it and that's why getting into the points I think would have been a fairly good recovery for us. So that's why I'm obviously gutted not to pull that off.

"I think relative looked like we had pretty good pace on that medium. On the soft we struggled at the beginning. But yeah, I think I just wish we, if we'd finished the race we would have been quite upbeat about it. Not much more to say now. I feel pretty small at the moment. I know I'll figure it out. I'll figure it out. It's just a silly mistake but just a bit of panic."

"These things happen," said Kvyat. "It's racing. Like I always said when I make a mistake people are... I mean, it happens. It's all I can say. I was a bit disappointed right in the moment but now what can you do about it?

"There was potential maybe for a point or two today, which I would have taken, the team deserved it a lot because yesterday in qualifying our car was great. Today we had a bit of a tyre management issue. So we move on to the next one. We have a strong package. I'm sure our time will come.

"Today, like I said, we had some unexpected problems, issues with that. With the tyres I mean. We had strange overheating, or I don't know, I just lost a lot of rear grip. And then we boxed so we just were behind McLaren so we were doing a decent race however Daniel's pace was a bit quicker than ours at that point. But the race is long here so I was hoping our race would come towards the end and unfortunately it ended there so we don't know how it would end."