Bottas surprised by gap to Ferrari 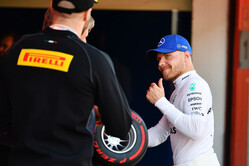 Even as the clock ticked down in the final stages of Q3, there were certain to be Ferrari fans around the globe convinced that the Italian team was about to spring a surprise, some new fandangled engine mode that would blitz Mercedes and loudly declare 'game on' in terms of the championship.

But it was not to be, despite the aero upgrades and spec-2 engine, the gap between the Maranello outfit and its German rivals has actually widened.

Asked if he was surprised by the size of the gap, Bottas admitted that his team had expected things to be somewhat different.

"I have to say that when I saw the times, definitely we expected Ferrari to be closer," he said. "Everything based on winter testing, this seemed to be a track that really suits them and since the practice, we saw yesterday that we were in good form.

"Obviously we have been doing a good job as a team with the direction we've been taking the car, in terms of where to find the performance and how and so on," he continued, "so we've done a really good job on that and I think we're all impressed."

"We didn't expect to have the gap, for sure," added teammate Hamilton, "and in terms of whether it's better than last year, for sure it's better. I don't really know what else to say."

"Coming here we did not expect... we seemed to lose a quite big amount of time in the last sector," said Sebastian Vettel. "I think it's quite clear we seem to be faster down the straights, so probably carrying a little bit less wing than them, but then obviously in the last sector there are no straights and yeah, struggling a little bit to bring it together, so it's not a very long sector but they're quite some corners, and mostly lower speed, and that's where we seem to be losing the most time.

"We know this track very well, everybody does, but the conditions today, etcetera, we were not able to match them."