Haas and Alfa Romeo to run spec-2 engines in Monaco 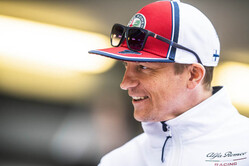 While Ferrari clearly struggled in Spain, its drivers finishing fourth and fifth as the raft of new upgrades failed to make their mark, it was in the corners that the SF90 lost out, Mercedes and Red Bull admitting that in terms of outright grunt the Maranello team leads the way.

While the new power unit, originally scheduled to be introduced in Canada, was only available to the works team in Spain, this weekend Haas and Alfa Romeo will both have the new engine.

"We now get the same spec introduced for Ferrari in Barcelona," confirmed Guenther Steiner. "I don't know how much the power difference is and how much better the drivability is - it's not only power, it is energy management and all that stuff - but for sure, it will not be worse."

With full throttle only available for around 40% of the lap, according to Mercedes, neither Haas or Alfa Romeo is likely to reap the full benefit of the new engine, though on a track where grid position is vital, every thousandth of a second will count.

Interestingly, last year, Ferrari tended to run the new-spec engines in its customer cars before trying them in the works entries.