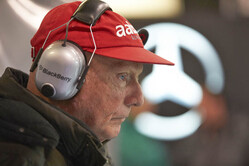 The FIA gave permission for Lewis Hamilton to miss the official press conference in Monaco today, as the Briton and his team mourns the loss of chairman Niki Lauda, who passed away on Monday.

While Mercedes has allowed Hamilton to skip all media duties today, his place at the FIA press conference was taken by teammate Valtteri Bottas.

"It's really shocking news to start the week," the Finn told reporters. "He meant a lot to me, but also to every single team member. He was a big part of the Mercedes family.

"He was a massive motivation for everyone, and for me," he added," everything he achieved, the difficult career he had, the comebacks. I will never ever forget.

"So, not the best mind-set for the weekend," he admitted, "but I am sure as a team we can turn it into motivation."

The German team plans a tribute on its cars to Lauda, who was the team's non-executive chairman, this weekend, as do McLaren and Ferrari, with whom the legendary Austrian won his titles.

It is anticipated that F1 will pay tribute to Lauda on Sunday ahead of the race, an event he won twice, both times with Ferrari.

"I didn't have many chances to meet with Niki but the very few times I spoke to him, he was extremely nice," said Charles Leclerc, who will line up on the grid for the Scuderia on Sunday. "He was always available and also very humble despite what he achieved. He is a great example for the sport in general and he will be missed a lot."

"The run-up to this Grand Prix has been perturbed by our sadness at the news of Niki's death," said team boss Mattia Binotto. "His straightforward, no-nonsense approach will be missed in Formula 1 and it will seem strange for all of us not seeing him in the paddock.

"Niki was a standard bearer for Ferrari and for Formula 1 and he pushed through changes in motor racing that made it even more professional, being ahead of his time in terms of being a stickler for detail which is now very much a key element of our sport."