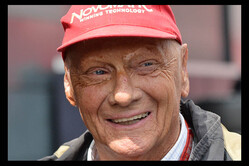 The glitz and glamour of Monaco will be severely compromised this weekend following the news that Niki Lauda has passed away aged 70.

Arguably one of the finest drivers to grace the sport, undoubtedly one of its true characters and certainly among the very bravest, Lauda "passed away peacefully" on Monday, according to his family.

His on-track battles, particularly with James Hunt in 1976 are the stuff of legend - and even a Hollywood movie - as is his remarkable recovery following his crash at the Nurburgring that same year.

So bad were his injuries that as he lay in hospital Lauda was given the last rights, a move that not only encouraged him to fight his injuries harder but to turn his back on religion.

Despite his horrific injuries, Lauda only missed two races and against all odds lined up on the Monza grid just six weeks later to resume the title fight with Hunt.

The title fight went down to the wire in Japan, where, such were the conditions at the rain-swept Fuji track that he regarded it as unsafe to continue, a decision that was to cost him the title and (further) sour his relationship with Ferrari.

Nonetheless, he remained with the Scuderia in 1977, winning a second title with the Italian team, before heading to Bernie Ecclestone's Brabham team.

Though there were no titles with Brabham, Lauda once again made history with the Surrey-based outfit, winning the Swedish Grand Prix in the legendary Fan Car that was to be subsequently banned by the team's owner and effectively placed in mothballs at Biggin Hill.

Starting off in Minis, Formula Vee and Sportscars, a typical Lauda move saw the youngster take out a £30,000 loan with which he bought a drive with the March F2 team. Having impressed the Max Mosley, Robin Herd owned team he was promoted to its F1 programme but with little success.

A further loan bought him a seat at BRM, where he was partnered with Clay Regazzoni. The team in obvious decline, shortly after Regazzoni left BRM to return to Ferrari, Enzo Ferrari signed Lauda based on the Swiss driver's recommendation.

After four seasons with Ferrari which saw two titles and one runner-up finish, Lauda spent two seasons with Brabham. At the end of the second season, having finished 14th in the standings the Austrian announced his retirement.

In the meantime, Lauda had founded his own airline, Lauda Air, which came into operation in 1985.

In 1982, Lauda returned to F1 having been offered a mouth-watering deal by team boss Ron Dennis. Before the season had even begun however, the Austrian was involved in controversy, one of the leading lights in the so-called Drivers' Strike ahead of the South African Grand Prix.

In his third season with the Woking outfit Lauda secured his third title, beating teammate Alain Prost by just half-a-point.

At the end of 1985, his airline now operational, Lauda retired from F1 for the second, and final time.

Appointed a consultant at Ferrari by Luca di Montezemolo, Lauda eventually sold his airline to Austrian Airlines, subsequently going on to form another airline, Niki, which eventually merged with Air Berlin.

In 1999 he was appointed team boss at the Jaguar F1 team that had risen from the ashes of Stewart and was to eventually morph into Red Bull, while in 2016 he founded yet another airline, LaudaMotion.

Along the way, Lauda never lost touch with F1, other than authoring a number of books, he was also a popular, if outspoken, pundit for RTL.

In late 2012, Lauda joined Toto Wolff in buying into the Mercedes F1 team, and was a key figure, along with Ross Brawn, in luring Lewis Hamilton away from McLaren, a move for which the Briton will be forever grateful.

Last summer it was revealed that the Austrian legend had undergone a lung transplant, though it was made clear that this was not a result of his 1976 crash at the Nurburgring.

Despite being unable to attend races as he recovered, Lauda kept in constant contact with the team and even gave the occasional interview to the media, the Austrian lending his support to Sebastian Vettel during his difficult end to last season.

In January it was revealed that Lauda had been treated for influenza over the Christmas break.

The term 'legend' is overused to the point that it has become almost meaningless these days. However, in terms of Niki Lauda it is wholly appropriate.

Motorsport has lost a giant, not just in terms of his success as a driver, but his bravery, his attitude and his wicked sense of humour. Nobody who came in contact with the Austrian failed to be impressed by him.

On behalf of our readers, to his wife Birgit, his children and the Mercedes team, Pitpass offers its sincere condolences.

Monaco just won't be the same this year.