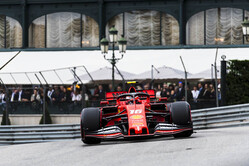 Ahead of today's sole practice session the air temperature is 20 degrees C, while the track temperature is 31 degrees. As on Thursday, there is lots of cloud but the sun is breaking through in places. Nonetheless there is a 40% chance of rain.

Lewis Hamilton topped the timesheets in both of Thursday's sessions, but in both sessions teammate Valtteri Bottas was only 0.8s off the pace, with Max Verstappen very much in the mix in FP1.

Unfortunately, the Dutchman was sidelined for much of FP2 after his car suffered a water leak after picking up some debris.

Ferrari remains very much off the pace, but due to the nature of the track this was to be expected.

Best of the rest on Thursday was Alexander Albon in the Toro Rosso, while Haas and Alfa Romeo looked good.

Other than Williams, the two other teams clearly struggling here are Racing Point and Renault, both seemingly pinning their 2019 hopes on heavily upgraded cars that are to appear in the coming months.

One minor change to the Mercedes today is that both cars are running red Halos in tribute to Niki Lauda, the sport planning an official tribute to the three-time world champion before tomorrow's race.

The lights go green and Norris is first out, followed by Raikkonen and Sainz.

Raikkonen, of course, is starting his 300th Grand Prix this weekend. We don't say 'celebrating' because he insists that he is not interested in such things.

A late set-up change on Hamilton's Mercedes means the Briton is not yet in his car, indeed, he is standing at the front of the garage watching proceedings.

All those that have gone out thus far are on the hards, Russell (softs) the only exception. Ricciardo is also on the red-banded rubber.

Russell gets things underway with a 22.611 as the Toro Rosso duo head out, both on softs. Next time around the Williams driver improves to 17.926.

Replay shows Albon lightly kissing the barriers, something we saw quite a lot of on Thursday.

The Ferrari head out, followed by Bottas, all are on softs. Hamilton follows.

A 13.053 sees Vettel improve to second, as Hamilton reports that he's not happy with his tyres, complaining of a vibration. The Briton posts 13.896 to go seventh.

Leclerc improves to 12.956 but Bottas is already on another hot lap. Despite losing pace in the final sector, Bottas crosses the line at 12.238.

14 minutes in and only 11 drivers have posted times, the Bulls having only completed an installation lap.

As was the case on Thursday, we are seeing that the tyres are good for several hot laps.

Vettel goes top with a 12.583 but Hamilton has found a gap and is on a very quick lap. Like his teammate he loses time in S3, but nonetheless he goes quickest with a 12.496.

Out come the yellows, followed by the VSC, as Vette locks up his front-left and goes into the barriers at Ste Devote. The German climbs from his car which is lifted to safety.

Another improvement from Hamilton who consolidates his top spot with a 12.034, while Bottas improves to 12.238.

Quickest in the final two sectors, Bottas grabs the top spot with an 11.835.

With Vettel out, and now attending the inquest with Mattia Binotto, Leclerc is down in eighth, 1.121s off the pace.

The Monegasque is also to be investigated by the stewards for a "VSC procedure infringement".

Having been badly baulked in the tunnel by Stroll, Leclerc decides to repay the compliment under braking for the Nouvelle Chicane. Unfortunately, it is Giovinazzi who gets the brake test (and the hand gesture) having overtaken Stroll.

Replay shows Kvyat clout the barriers at the exit of Portier, as he tries to avoid Perez, bringing back memories of Senna.

As we move towards the qualifying sims, Bottas posts 11.338 with Leclerc posting 11.265 moments later. Three PBs see Hamilton cross the line at 11.478.

The Renault pair are currently 13th and 14th, for the French team the French Grand Prix - where its major upgrade will be introduced - cannot come soon enough.

Hulkenberg improves to eleventh and Ricciardo sixth with a 12.519.

Russell is told that his main loss is "braking at T6", but in all honesty if that was the only place where the Williams was losing out, George, Claire and the team would be ecstatic.

Hmm... Hulkenberg improves to sixth with a 12.489, while traffic means that his teammate is unable to respond.

While the top four - Leclerc, Bottas, Hamilton and Verstappen - are not improving, they remain covered by just 0.336s.

Stroll takes to the escape road at Ste Devote.

The Bulls head out on fresh softs, however Verstappen has to abort his first flying lap due to traffic.

Following PBs in the first two sectors, Gasly hits traffic in S3, and even though he improves his time he remains fifth 0.701s off the pace.

Verstappen improves (11.539) but remains fourth, the Dutchman having clouted the barrier as he exited Rascasse.

PBs in all three sectors see Giovinazzi go eighth with a 12.496.

As Gasly closes to within 0.593s of Leclerc's best, Kvyat goes sixth and Raikkonen seventh.

With four minutes remaining, the McLarens and Racing Points are at the bottom of the sheets with Williams.

Another improvement from Gasly sees Gasly close to within 0.473 of Leclerc and just 0.2s of his Red Bull teammate.

The session ends with no further significant improvements.

While Leclerc is quickest, it should be noted that neither the Silver Arrows not Verstappen was able to get in a clear qualifying run, and therefore we do not anticipate a major shock this afternoon. Nonetheless, the Monegasque heads Bottas, Hamilton, Verstappen, Gasly, Giovinazzi, Kvyat, Magnussen, Raikkonen and Albon.