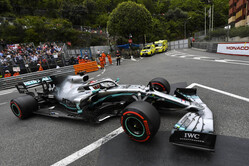 Ahead of this afternoon's practice session, the air temperature is 18.7 degrees C, while the track temperature is 31.1 degrees. It is warmer than earlier, but the cloud cover remains.

Lewis Hamilton was the pace-setter earlier, however, the Briton, second-placed Max Verstappen and Valtteri Bottas were covered by just 0.072s.

It was a fast and furious ninety minutes, and while there were a couple of spins, one or two offs and even a few brushes with the barriers, there were no serious incidents.

Other than the sheer pace of the big guns, the one moment of drama was when both Haas drivers were black flagged - due, it turned out, to a communications issue the team was suffering and not, contrary to what Sky F1 suggested, an issue with the Rich Energy logo.

Another driver who had limited running was Carlos Sainz. Following his install lap an issue was discovered which meant the Spaniard only got out in time to perform a further install lap at the very end of the session.

The lights go green and Norris leads the way, followed by Sainz and Grosjean.

Unlike FP1, there is a fair mixture of the compounds, all three currently in use.

Grosjean straightline's the Nouveau Chicane, taking a very bumpy ride over the kerbs.

Giovinazzi gets up close and personal with the barriers as he exits Anthony Noghes.

Albon and the Ferrari pair are on softs, while fourth-placed Raikkonen and the next five or six drivers are all on mediums.

Fifteen minutes in the Mercedes pair head out. Bottas goes quickest (12.708) on his first flying lap, while Hamilton can only manage sixth (13.393).

Moments after brushing the barriers at T15, Perez admits "I touched the wall".

Bottas consolidates his top spot with a 12.315, while Hamilton posts 12.381 to go second. Both are on the medium rubber.

Another lap, another improvement for Bottas, who crosses the line at 12.167.

Now it's Verstappen's turn to brush the barriers at T15.

Hamilton is the first driver to break the 1:11s barrier, the world champion posting 11.926.

None the worse for his Swimming Pool encounter, Verstappen goes third with a 12.289, albeit on the softs.

Out come the yellows as Russell heads down the escape road at Ste Devote.

Early days, but this is looking ominous as far as Mercedes is concerned, with Red Bull looking strong, but not strong enough. Ferrari doesn't even appear to be in the game.

After his trials and tribulations in FP1, Sainz is currently ninth on 13.111.

Vettel goes quickest with an 11.881, the German on a new set of softs.

Leclerc claims that he's "pushing" but that his front tyres "don't want to warm up".

Having gone quickest in S1 on his next flying lap, Vettel loses time in S2 and subsequently aborts. His tyres appear to be shot.

Bottas is the first of the Mercedes drivers to switch to softs.

A 12.031 sees Albon go fourth on the softs, ahead of Verstappen, Giovinazzi, Leclerc, Grosjean, Raikkonen and Gasly.

On his softs, having aborted his first flying lap, Bottas posts 11.597, as teammate Hamilton heads out on a brand new set of softs.

As Hamilton aborts his first flying lap, Magnussen improves to seventh with a 12.174.

Stroll, who had a difficult opening session, is still struggling, even the Williams pair are currently quicker.

Next time around, Hamilton goes quickest in S1, he posts a PB in S2, but he loses time behind Leclerc and subsequently opts to abort the lap.

In FP1 we saw that the softs were good for four or more laps, so the world champion has a couple more goes yet.

Again Hamilton goes quickest in S1, this time maintaining the pace in the second sector. At the line its 11.245 which is good enough to topple his teammate.

Despite a "messy run", Hulkenberg is told that he has more time.

Bottas does well to hold it all together as he clouts the kerb at the Nouvelle Chicane.

Hamilton brings out the yellows after locking-up and heading down the cul-de-sac at Ste Devote.

Gasly leapfrogs Albon with an 11.938 to restore some Red Bull pride.

Russell none too happy after losing time behind a Racing Point. "Yep, it's Stroll again," he informs his team.

No sooner has Bottas improved to 11.199 than Hamilton posts 11.118. That's being unhappy with the balance of his left-front, the tyre he flat-spotted in that lock-up at Ste Devote.

Stroll goes momentarily airborne as he rides the kerb at the Swimming Pool exit. Nonetheless, he has improved to 18th with a 14.558.

Just above Stroll on the timesheets is the Renault duo, both over 1.7s off the pace.

We haven't seen Verstappen for some time, indeed the youngster has only completed 10 laps. And with 28 minutes remaining, mechanics are still working frantically on his car.

As Leclerc admits concern at his tyres, he is told his brakes are "too hot".

Phew! Vettel is lucky not to go into the barrier at Ste Devote, the German leaving a massive trail of rubber on the track after locking-up and not having time to take to the escape road.

As the clock counts down, though work continues on his car, Verstappen in in the Red Bull garage, helmet on and ready for work.

Indeed, with 10 minutes remaining the Dutchman heads out on a brand new set of softs.

As ever, traffic is an issue, while Verstappen slows in order to create a gap to Leclerc ahead, he has a car closing in from behind and therefore the gap he creates isn't as big as he wants.

Both drivers are unhappy with their tyres, Ricciardo is on sots and Hulkenberg is on mediums. The Australian subsequently pits for hards.

"Not good," reports Verstappen. "The car has no grip at all, sliding, understeering," he subsequently adds, before pitting.

Other than the Renaults, and Williams of course, the other team clearly struggling here is Racing Point, both drivers over 1.6s off the pace.

As in FP1, it's close between the Mercedes pair, 0.081s close, and while we didn't see a representative time from Verstappen, he appears to be the only threat to the Silvers Arrows.

A superb fifth from Albon, but with Kvyat down in 14th, was Toro Rosso trying something strategy wise, or was the Thai driver's pace genuine.

Both Alfa Romeos were in the top ten, while Haas and McLaren look strong, with Racing Point and Renault barely in the game. Hard to believe that his time a year ago Ricciardo was king of these very streets.