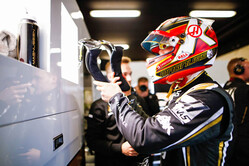 Shortly after this morning's session got underway, Race Control black flagged Haas driver, Romain Grosjean, the rarely used flag signalling that the driver - whose number is also shown - must return to the pits or pitlane immediately

As speculation mounted as to whether there was a serious issue with the car, or whether the Frenchman had committed an infringement of the rules, teammate Kevin Magnussen was also flack flagged.

With no clue as to why this was happening, Sky Sports suggested that it might be something to do with the recent court action which saw Rich Energy accused of copying another company's logo, a suggestion that bordered on the totally ludicrous.

It was eventually discovered that the American team had suffered a major communications issue which affected all aspects of its IT, even its TV monitors had frozen along with telemetry and radio.

Unable to recall its drivers, who appeared not to see the pit signs that were being waved frantically from the side of the track, the team eventually called on Race Control for assistance.

"We couldn't communicate with drivers," confirmed the team. "So the FIA stepped in so we could get cars back to the pits as the pit boards weren't doing the business."Both drivers were able to return to the track late in the session, Magnussen going on to finish 8th and Grosjean tenth, despite losing over an hour of running time.

As an aside, the team is still sporting the controversial Rich Energy logos.