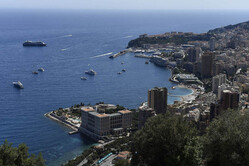 Ahead of this year's Monaco Grand Prix, approximately two-thirds of the circuit has been resurfaced..

Tyre compounds this weekend are the C5 (soft), C4 (medium) and C3 (hard), the same combination to be used in Canada in two weeks.

Monaco is a race of negative superlatives, including the slowest average lap speed and slowest corner of the year. Maximum mechanical grip is needed first and foremost; hence the softest compounds are nominated - indeed, a number of drivers have selected the maximum 11 sets.

There is low grip in Monaco, with comparatively little track evolution (also due to the fact that the track is open to traffic each evening and all day Friday). Coupled with the narrow confines, this makes a safety car quite likely.

Unlike Baku, for example, the tyres are always working in Monaco with one corner quickly followed by another. This makes it relatively easy to warm up the compound.

Last year's race won by Daniel Ricciardo, who, like the other top eleven finishers, was on a one-stop strategy, in his case starting on the hypersofts and then switching to the ultrasofts. The same strategy was followed by the two other podium finishers, Sebastian Vettel and Lewis Hamilton.

In terms of the power unit, less than 30s - roughly one third of the lap - is spent at full throttle, which places an emphasis on the overall package's driveability rather than outright performance.

The tunnel section and pit straight are the only chances to hit maximum speed.

Monaco is a very bumpy circuit with lots of camber change. This can induce drops in oil pressure as the oil pumps aren't able to properly scavenge the oil system, or the oil tank succumbs to an unexpected loading. A temporary lack of oil pressure can be harmful to the turbo as lubrication is vital at the speeds at which the turbo operates.

Energy recovery is easy with the amount of braking points - the 19 corners are all taken at an average of less than 100kph and the MGU-K will have more than enough opportunity to recharge the ES.

Since energy recovery under braking is relatively easy, Monaco is one of the few races of the year where fuel consumption won't be critical, particularly as the overall race distance is so short and there is so little time spent at full throttle.

At the Grand Hotel (or Loews) Hairpin, the track descends from the Mirabeau and turns almost 180 degrees back on itself in front of the hotel. When the cars round the hairpin the engine is running at just 45kph and around 4,500rpm, the lowest speed and revs it reaches on track at any point in the year.