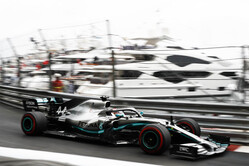 Following a trend we have seen all year lap times were quicker than they were in 2018: the best time from Lewis Hamilton in FP2 was more than 0.7s faster than last year.

Conditions were quite cool, with ambient temperatures of 24 degrees and track temperatures peaking at 33 degrees during the afternoon. The forecast for the rest of the weekend seems to be mixed, with still a possibility of rain for Saturday.

As a result of these cool temperatures, as well as a 'green' and slippery track as usual, there was a small degree of graining seen this morning, minimised in the afternoon.

All three compounds were run today, but the focus was firmly on the soft compound: which has been nominated almost exclusively by all the drivers for this weekend.

Monaco is the track that extracts the least energy from the tyres, so wear and degradation remained low throughout the day, as expected.

Unusually, there were no red flag stoppages or other lengthy delays, with very little contact with the barriers throughout the three hours of running today.

So far, the performance gaps between the compounds are around 0.8 seconds between medium and soft, and 0.9 seconds between hard and medium (even though there was not much running today on the hard).

Mario Isola: "It was a fairly typical Monaco Thursday, although with slightly cooler conditions than is often the case, and no lengthy stoppages. We saw most drivers on the soft tyres all day, which are similar to last year's hypersoft here, but with extra durability. As a result, the drivers have been able to push harder for longer: already at the end of Thursday we are not far from the pole time from last year. Although there are some question marks about the weather still, we'd expect the tyre strategy for qualifying and the race to be reasonably straightforward, with the teams having gathered plenty of information today."