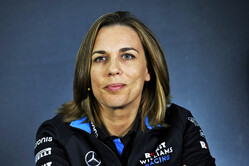 While history counts for little in F1 when it really matters, countless teams and circuits lost when they outgrew their usefulness or a better funded alternative arrived on the scene, Ferrari, in particular, has made good political use of the fact that it has contested all but 16 of the Grands Prix that have comprised the world championship since 1950.

Other than its various bonuses, it has won other rights including a seat on the board of the sport's parent company Formula One Topco, and powerful rights of veto on all manner of aspects of the sport.

Speaking in Spain, when asked if his team should be allowed to retain its right of veto over the rules and regulations post-2020, Mattia Binotto was in no doubt.

"I think we are doing well in that respect," he added, "and hopefully we can keep the same rights."

Speaking in Monaco, a number of teams did not agree.

"It's pretty outdated now," said Christian Horner. "That veto was put in place - from my understanding - years and years ago to stop regulations changes.

"Ferrari had V12 engines, they didn't suddenly want that to be vetoed, those rules to be changed," he continued, "because there were all these British garagista teams that were coming into the sport.

"I think it's just silly if I can be honest," said Claire Williams. "I have a problem in our sport anyway in the fact that I feel it's far too democratic. I've been quite open about that.

"I feel that F1 and the FIA should take more ownership of the regulations," she continued. "We run it too much in a collegiate way, which is detrimental when we all have our own agendas.

"We need to be looking at this sport and its sustainability into the future and protecting it and protecting the true DNA of that," she added. "By doing that by committee I think can be very difficult. And I really don't feel that one team should have a right, a veto. That makes no sense to me at all."

"I think we need Formula One to be progressive rather than defensive," said Cyril Abiteboul, "and the ability to block due process can be perceived or decided to be a positive for the sport is probably not good.

"Having said that, we completely recognise the specific value of Ferrari to the sport but which can be reflected probably in the commercial agreement and not in the governance."

"I think it's very kind of him to offer to represent the teams' interests," smiled Zak Brown, "but I think, as has been said before, we all have varying interests and I think like Claire said, Formula One themselves want to do what's in the best interests of the sport which I think ultimately is in the best interests of all us and we we're best having our own individual negotiations when and if that is appropriate and as Cyril said, I think Ferrari bring a tremendous amount to the sport and that can be recognised in other ways."

Of course, those "other ways" probably refer to money, another area in which the Maranello outfit has come to some pretty impressive arrangements, seeing that it is guaranteed $100m each year before it have even turned a wheel, and in recent years has regularly picked up more in prize money than champions Mercedes.