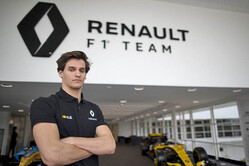 Lorandi's recruitment comes just before the Monaco round of the Formula Renault Eurocup this weekend. The 18-year-old, who hails from Brescia, currently competes in the Eurocup with JD Motorsport. He opened his 2019 campaign strongly at the opening round at Monza, with one podium and one fastest lap, and currently sits third in the rookie standings.

The young Italian started karting in 2007, taking titles in 2012, 2014 and 2016 before stepping up to single-seaters in 2017 in the Italian Formula 4 Championship. He finished a promising second in the championship in 2018 with five wins, 10 podiums and three pole positions.

As a Renault Sport Affiliate driver, Lorandi will benefit from Renault Sport Racing's advanced technical and physical training facilities to develop his abilities across the board. His position also allows Renault to assess his talents on a closer basis.

"It is a pleasure to work more closely with Leonardo," said Mia Sharizman, Renault Sport Academy director. "His initial performance in single-seaters has been impressive. He has had a promising start to the Eurocup and can continue his progress through his role as Affiliate driver. There is definitely room for more Italian drivers at the top levels of the sport, and we hope that Leonardo will develop within the framework of the Academy."

"I am really happy and proud to get this opportunity," said Lorandi, "I must thank everyone at Renault. With all of the opportunities Renault offers and the people involved, I feel as though I can make a huge amount of progress. I achieved a good result last year in the Italian F4 Championship, but this is a greater achievement.

"Being part of such a big and serious team like Renault is a good opportunity and I won't waste it. I want to keep the Renault colours as high as I can."